Though I'd been there once before for a short visit after some outlet shopping in Limerick (call it a not-so-dry-run), this seemed to qualify as my first official business at the relatively new, but oh-so-successful Craft Ale House in Limerick/Royersford, PA. (Why have I used so many hyphenated adjectives in these 7 short paragraphs?)

With Nick Johnson running the show for Tröegs, or maybe the promised appearance of Meg and Tara, the word got out and thirsty patrons beat a proper path to the door and filled the joint. Well, all except for a few notable locals, X, Y, and Z. 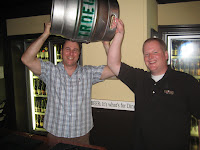 Mr. Big Dan covered the beginning of the evening at Craft Ale House and has captured a few nice pictures that you can check out over at the CAH blog. I showed up a few minutes later and fortunately not any later. The bar-top firkin of GABF-prepared Nugget Nectar was kicked in 51 minutes. That beer, I'll tell ya, is one tasty treat that typically peaks in the bottle earlier in the summer. But, being freshly made for GABF next month and being firkin fresh on top of that, it was rockin' everyone's worlds best I could tell from chit-chattering with the Vox Hopuli. Some guy named Foley, though, is still not impressed.

The quick kicking of the firkin shouldn't have been surprising given the not-a-space-to-be-found parking lot and the packed house inside. (It was a crowd for CAH, not Ace Hardware, in case there was any confusion.) Along with the Nugget Nectar and the Naked Elf, the usual complement of Tröegs brands were flowing as were a bunch of other stellar goodies that Craft Ale House is known for stocking in the cooler.

I used the evening to give myself a preview of Dark Horse things to come this Saturday at TJs back closer to home in Paoli. The Crooked Tree was a nice drinking IPA that I probably would have dipped into for another one, maybe two, if it wasn't for the 25 minute ride back home.

Now I know why I don't see my old friends quite as often in the 'burbs closer to Philly. With stellar joints like Ortino's, Union Jack's, and now Craft Ale House dotting the farther hinterlands, there's less reason for them to venture as far from home as they used to.

By the way, some suspicious behavior by someone cavorting in an Exton Beverage t-shirt did not go unnoticed. Question is, who is this guy? The 'someone' is not Greg Ramirez, by the way. Any guesses? 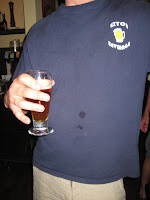 I don't know but I wish I had a Beer Yard T-Shirt!! GregR