Ways to stay cool on a hot summer day in Philadelphia

Some times I know exactly where to begin, other times not so much so. Fortunately, this past Saturday began in South Philly at Devil's Den, innocently enough with a couple of nice and tidy 5 ounce sampler flights of sour beer. A little tart here, a little sour there, some fruit over there, and some funk back over here. If I had to begin this story on Frankford Avenue, my task here would have been just a bit more difficult...read on, you might come to see what I mean by that. 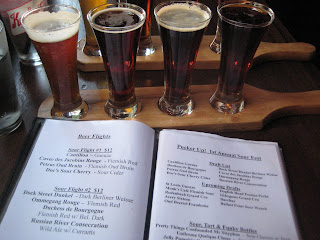 At Devil's Den, we ran into a healthy dosing of similarly-minded folks, including Dan from Left Hand, Megan from Duvel, Erin of Devil's Den (convenient, eh?), and Casey from across the river on the Jersey Side at Flying Fish. You know Casey's gonna be a big part of the story later on, right? Just wait for it. 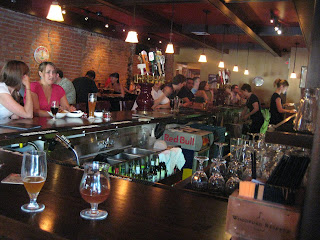 Believe it or not, yes, this was finally our first visit to Devil's Den. No, not a Philly Beer Week event (of the many they hosted) or any other of the regularly scheduled events that they host throughout the year have found me in a barseat at this tastefully appointed South Philly restaurant and watering hole, formerly Felicia's. I think I'll save a "formal" review for another time. This visit was about the sour beer festival ("Pucker Up!") that they were having (and continues all week with new beers being introduced every day) and hanging out with some good beer volk. We did nosh on some pulled pork and burger, both well done with some nice fries on the side. Megan's platter of quail, greens, and mashed potatoes was also a smartly crafted dish. But, then...oh yes, then...we wandered across into Northeast Philly. While Mike Scotese (Scoats), Phil ("intern") had been celebrating 13 years with 13 events in 13 hours, it became quite clear quite early in our visit that a fair number of others had joined in on the Grey Lodge party bus right from the get-go back in the hours when lunch is typically served. Uh, let's just say it was quite the scene of revelers doing their reveling and perhaps I'll leave it at that. It's a bit difficult to put in to words the scale and the efforts of the various events that went off like clockwork (believe it or not) at the top of each hour...well, except for Mr. Johnson from Tröegs who got a bit pre-empted by the band until 10:20.

Let's see if I can recap what we saw: Mr. Kehoe from Yards (at the tailend of his hour just before he sped away safely from the debauchery he left behind); Ms. Woods from Sly Fox (easter egg prize giveaways and chicken wings that I'm still trying to track down); Mr. Johnson of Tröegs fame (ah, what can we say about Nick that his reputation which always precedes him hasn't already said? good times, mate); and finally last but certainly not least Mr. Hughes from Flying Fish (the pictures below will tell you everything you need to know). For the sake of getting this all out there for you to see what you may have missed, I'm going to forego any other flowery descriptions to set up the pictures. I'm sure you're all relieved. You're only here for the pictures anyway, right? Just so you know, there were many, many pictures to wade through to depict for you here the good times that went down this weekend in Northeast Philly at Grey Lodge. Alone, the 4 hours that I was there for was one big photo op after another. The blood, the tears, but certainly the sweat people...just so you know...it's all for you ;-) Alright, let's get some captions on these and move along...oh, er, and maybe I should say one last time a big congratulations to Scoats for continuing to do what he does so well for, getting to be, so long. Cheers! 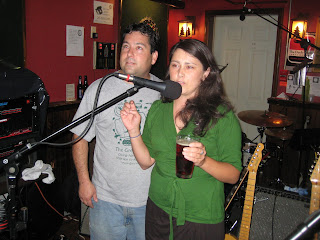 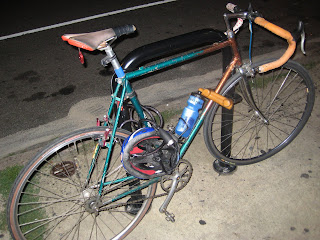 (Any guesses who rode to the Anniversary Party? You might want to zoom in on the water bottle for your first hint) 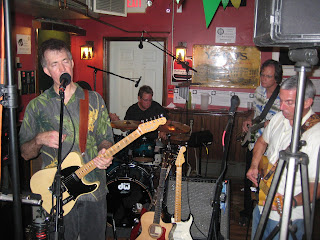 (The band, Blue Bizness, played on for quite a few hours...hey they're not far in Berwyn from my home) 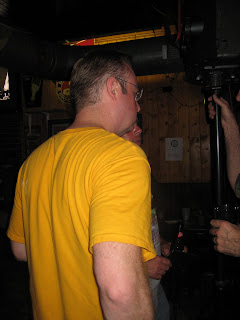 (A surreptitious picture of this guy, Steve, who always seems to looking at the camera or shooting from behind it. If you've ever seen him in action, you know how difficult surreptitious can be with him) 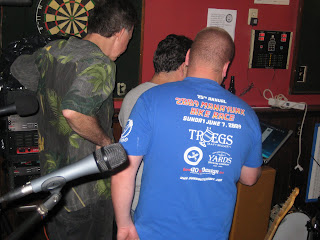 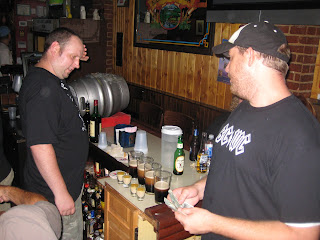 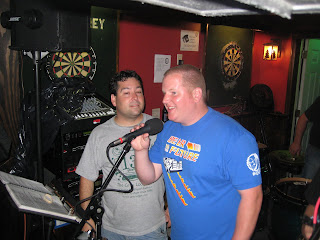 (Does anyone have the Greenman costume?) 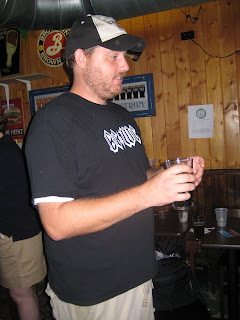 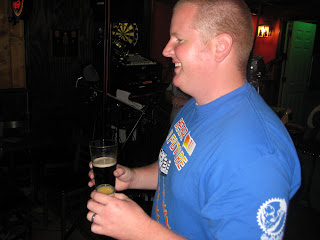 (Nick just can't do his promotion in peace) 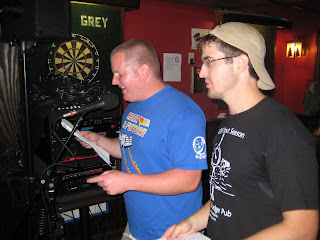 (Phil the Intern, the real mastermind behind the festivities?) 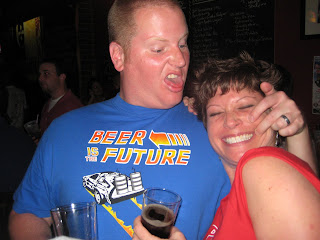 (And now we've reached the call-in portion of the show that I like to call, Pin a Caption on that Photo) 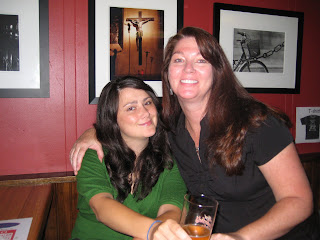 (A couple of leading lasses of libations from Philly, Suzanne Woods of Sly Fox and Megan Maguire of Duvel USA) 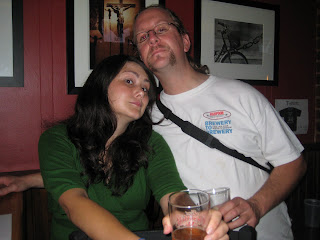 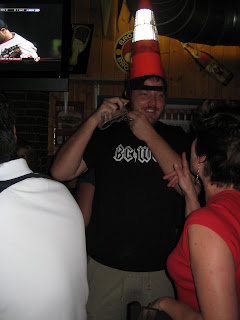 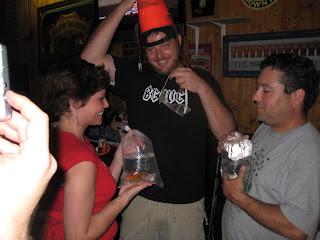 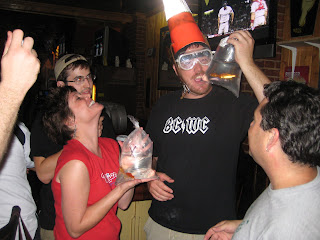 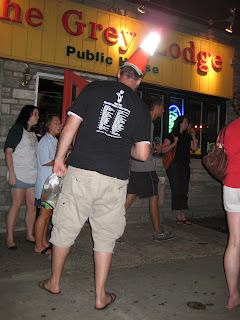 (The Leaning Tower of Hughes) 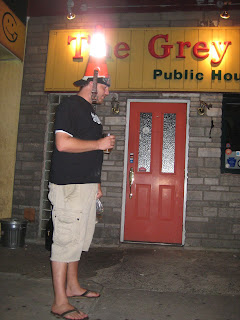 (Fee-Fi-Fo-Fum...how much bigger does Casey look than the front door?) 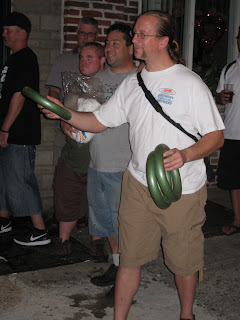 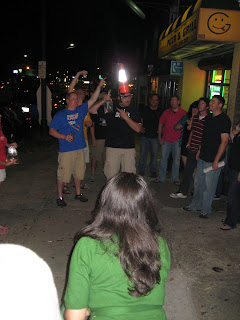 (Frankford Ave. had never seen anything like this, I'm sure) 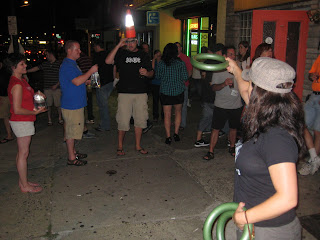 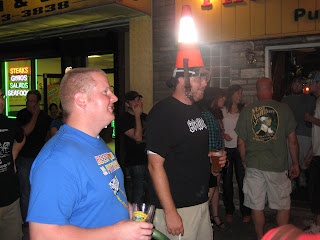 (Those were some long-lasting batteries in that there beacon) 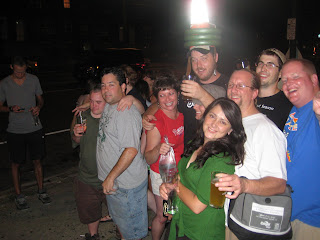 (Party People in the House; collect 'em all)
Written by Bryan Kolesar at Monday, August 17, 2009