We apparently showed up between Wave 1 and Wave 2 of the Dark Horse day long celebration at TJs. We needed dinner, so this seemed like a natural fit. After convincing the dogs to "do their thing" in the torrential downpour, we headed up the road. 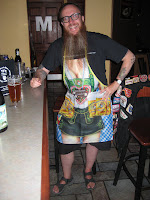 Indeed, not a familiar face save for proprietors Jeff and Terri. Of course, it didn't take long for a few others to nudge in our hightop table. You probably recognize one of those guys, whose celebrity status just went up another 1/2 notch with his profile in the current Imbibe issue on magazine stands. Otherwise, what can I tell you about the brews from Dark Horse? One: that both the Scotty Karate scotch ale and Boffo brown ale (but particularly the scotch) went very, very well with the Pulled Pork sandwich. Two: Of the beers we sampled, though there were no clunkers, the black ale and brown ale stood out as two of the best of the day. Three: the "aphrodisiac" qualities of the Rod/Red ale will not be discussed here (!) other than to say the beer was smooth and tasty, but probably don't warrant more than two per session...which means I'll hope to be back later this week to try some more along with the oatmeal stout and raspberry ale that we never got around to trying....because.... 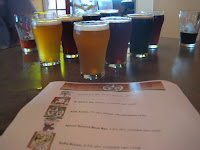 ...because I switched over and gave the new, very drinkable, La Trappe Isid'or a try. It's been brewed to commemorate the brewery's 125th anniversary and its first brewmaster, Brother Isidorus. And, somehow I managed to stay away from the Racer 5 on the handpump. And, what else? (you're right, this posting may just meander and wander straight into dinner hour, hold on) A license application in the window (forgot to snap a picture, but you know what they look like), suggests that outdoor dining is coming just in time for some cool fall weather dining at TJs. And, speaking of dining, if you like their traditional mac & cheese, and if you like food with a bit of a "kick", then you absolutely must try the new Jalapeño-Green Onion Mac & Cheese...created with a nod to The Brew Lounge as a thank-you for the TJs Profile Picture, ahem. Just another day at TJs.
Written by Bryan Kolesar at Sunday, August 30, 2009

Hey Bryan, that is great to hear that TJ's is getting some outside dining. Is that doing to be out from or on the side or something? Look forward to seeing that next spring.

Not bad for your local hang out hey B?

Jeff said he's hoping that all will be approved and ready for some outdoor fall dining; paperwork has been submitted, now it's up to the paper-pushers. He's got the tables, chairs, and some Spaten umbrellas ready to go.

The seating would stretch the length of the restaurant, and allowing the required 42" for pedestrian traffic (sorry, smokers will need to relocate to the tunnel under the railbed ;-)

yeah, Jeff. you guys have come along way. You started off with this craft beer "thing" and made great impressions in the beginning. To see where you've taken it...boggles.

Great news Jeff! Can't wait for some outside seating when I get back in June but it bumms me to that I won't see it go live!

I have a little suprise that I am brewing up for when we get back!