Closing the book here on a couple of odds 'n' ends from last week. Though, nothing so odd about them at all. Unless you consider odd seeing Dr. Joel Armato of New Holland Brewing two consecutive nights...which I understand is just as many times as you can count on seeing him during Philly Beer Week. Or odd having a 70 tap setup of mostly good craft and imported beer in University City....okay maybe that's one is a little on the south side of odd. Or if you think that beer and cheese together is odd...which in that case, you'd best get paying attention and studying up. City Tap House Tuesday night saw Patty and I hop the train for Center City to take in a private showing of the new City Tap House. From best I could gather, the city's latest entry into what has seemed to be a steady stream of new bars over the last year or two already opened to the public---and had a soft opening---and now this past week played host to a friends/family/media type of private event. Not sure how traditionally linear of an approach this was but, no matter, in a nutshell City Tap House is open and they are pouring many fine domestic craft and imported beers, one after another on numerous (6?) draft towers, interrupted only occasionally by one of "those beers" that many of us here around The Brew Lounge don't particularly care for. 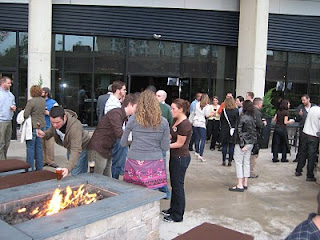 (on the terrace at City Tap House)
A rough count of a hundred or so media folk, brewers, publicans, sales reps, distributors, and the like turned out just as the rainy weather was clearing for the evening. It was slightly cool outside, so the open firepits on the "green" rooftop patio were a welcome part of the ambiance for many. I can see this becoming prime real estate in the cooler weather. Approaching CTH (yes, yet another acronym has been introduced!) from Walnut Street, there's not much indication of the restaurant other than from a glance upward to the patio where you can see the tips of the dancing flames. A walk through a simply marked door and then a short ride up an elevator gets you in to the bar. 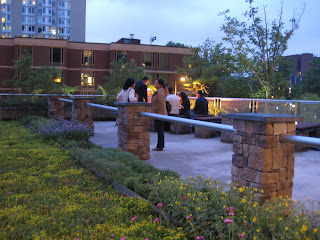 (night falls over the firepits at City Tap House, a nice addition to the al fresco city landscape)
Inside, a tasteful mix of wood and industrial metal (hey, I never claimed to be an interior designer!) provide for a real comfortable session at the bar or in the restaurant. The press release says that they're shooting for a mountain lodge feel; I suppose I can get with that, though it's not the first striking reaction that I have when I look around...no matter. 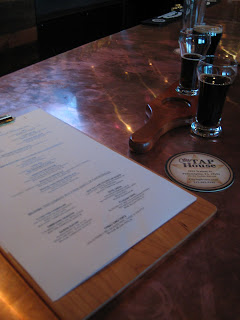 (clipboard menus of very good beers spanning the flavor spectrum)
A long rectangular bar allows bartenders to circle the bar to reach all of the six (I believe it is six...or seven?) draft towers. A clipboard menu of the pretty decent looking draft menu allows patrons to thumb through and make sense of the Saison Duponts, the Harpoon Single Hop ESBs, the New Holland Black Tulips, the Sly Foxes, Victorys, Yardses, and on and on. I think you get the picture. 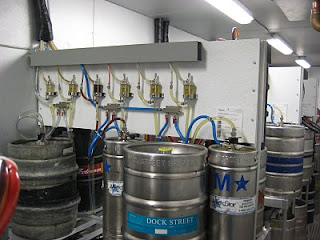 (one stall in the cold box per draft tower...keeps things nicely organized)
Along with several others, we were treated to a behind-the-scenes tour of the cold box storage for the draft beer delivery system. It's not often that you see such meticulous care taken in the organization of the kegs and their draft lines. Basically speaking, the cooler has one "stall" for each set of taps on a draft tower. Lines are zip-tied and labeled, dials are clearly postitioned to monitor beer flow pressure (didn't see any spelling errors, in case the PLCB is still worried). With around 70 taps, organization becomes an even more important thing. Not too shabby! And, if the concept of this level of choice is too much for and you'd like to remember what you've enjoyed in the past, CTH has a system for logging your purchases into a database for your future reference---should we trust that the privacy policy here is stronger than at Facebook?! ;-o

I didn't inquire much into how this works, but I suppose that any given point you should be able to get some sort of report at the bar of what you've had in the past. To be able to check it out online at home with an account would be useful too. I can't recall that I've ever seen or heard of another bar doing something like this. 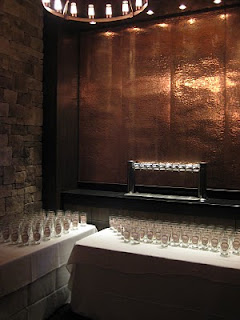 (private tasting room can be reserved for you and your bestest beer drinking friends)
One other unique feature at CTH (did I mention the firepits?!) is the private tasting room. Say you want to get together the team from the office, maybe 15 or 20 of you. You have the idea to make it beer-centric and help introduce your co-workers to your favorite beverage. Behind the reception desk at CTH, there's a private room with a set of unique taps that can be setup to your specification for your private event. There's room to mingle and have light bites to eat while you're sampling from your specially-selected beers. Before we headed back to the train out of the City, we cabbed it over to Brauhaus Schmitz for a taste of the qualifying round for the Philly Beer Geek competition. Turned out it was much less pomp than I was expecting. In fact, the winner had already cleaned up and claimed his spot in the semi-finals...which I see were held just last night and in which he moved on to the finals....which did I mention I'll be donning a robe for as a 2010 PBW Finals Judge? Yes, you read that correctly. Nonetheless, we had an hour to kill so that allowed me to dabble in both a Gose and a Beliner Weisse....i.e. Prost! Did I mention that we had one time for one last once at America's Best Train Station Beer Bar? (plug) New Holland, Cheese, and Craft Ale House Calkins Creamery from above Scranton, PA. New Holland Brewing from Michigan. Last Wednesday, Craft Ale House in Limerick served as the meeting place for the two and their respective cheeses and beers. Jay Montgomery from Calkins Creamery made the trip down the turnpike to share some of his cheeses with one of its most pairworthy relatives: beer. 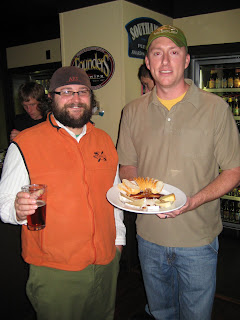 (Joel Armato, New Holland Brewing, and Jay Montgomery of Calkins Creamery show off their favorite tasty treats at Craft Ale House to a roomful of barley and dairy lovers)
This actually formed the basis of my dinner for the evening. Seriously, beer+cheese+bread = dinner, am I right? And while I didn't settle on any "awards" for best beer and cheese pairings of the evening (though the Golden Cap Saison and the Skinner Falls Basket-style Tomme was pretty damned near close to perfect), I believe I found a new "it" beer of the year...at least from New Holland, that is. El Mole Ocho!

I thought previously that Charkoota Rye was one my favorite 'most interesting' beers from this brewery. The Ocho blew it away. Complex layers of a little roast, a little smoke, a little pepper, a little chocolate, all created a lot of interesting flavor and aroma. A very pleasing beer to say the least and one that I better find more of before it's too late! 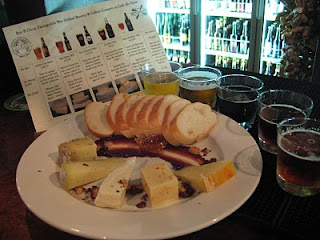 (at Craft Ale House in Limerick, PA...cheese from Calkins Creamery and beer from New Holland Brewery)
This made for a very pleasant way to grocery shop at Wegmans in Collegeville on the way home. I've never mentioned the beer selection at Wegmans; I'm beginning to feel like, at least around southeastern Pennsylvania, it's more noteworthy to talk of places NOT serving the kind of beer that we all enjoy. In other words, as many of you already know, this particular Wegmans has a very impressive selection of bottled beer for sale to go. Makes me curious as to the Wegmans that will very soon open less than 1/2 mile from our house in Malvern.
Written by Bryan Kolesar at Wednesday, May 26, 2010