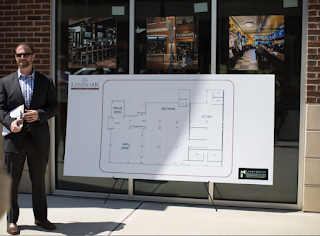 Good crew behind Landmark Americana and its lively bar/restaurant atmosphere. Been to the West Chester and the University City locations. Done pretty well mixing in the craft beer as well, though if my recollection holds up, the city location excels beyond the West Chester spot. The same management team was behind the opening of Urban Village Brewing Company last year in the Northern Liberties neighborhood of Philadelphia. They already are in NJ (southern) and have now announced that later this year, they'll be pushing up into northern NJ, specifically just outside Trenton. Announcement follows:


On May 8th Landmark Americana Tap & Grill hosted a sneak peek celebration to unveil plans for its newest location at Campus Town at The College of New Jersey. Founder Dave Goldman and local elected officials, as well as members of TCNJ administration, were on hand. The fifth Landmark Americana will feature a combination of entertainment with a sports bar atmosphere, boasting an impressive lineup of 40 taps featuring local craft brews, HDTV screens, and delicious pub fare. Landmark Americana will be bringing approximately 70 full and part-time jobs to the location. The 9,200 square feet location will open in Campus Town, which was developed by the PRC Group, and plans to open early Fall 2018.