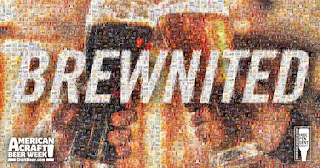 They've been doing this for quite a few years now. Did a little research through the annals of The Brew Lounge and found this fun post I did regarding ACBW back in 2011. Some sightings of brewers you may know.

The Brewers Association has been behind this nationwide push to showcase great American (craft) beer every May since 2006. Plenty going on around the country and this little link will help you with some of that. Though, around these Philly parts, I've casually come across only a few related events such as at Dogfish Head, HiJinx... okay, not really Philly, but maybe they're preoccupied with upcoming Philly Beer Week of its own. The press release follows.

Celebrate Small and Independent Brewers Across the Country -May 14-20, 2018-

Boulder, Colo. • May 8, 2018—For the thirteenth consecutive year, small and independent brewers from coast to coast will participate in American Craft Beer Week (ACBW) from May 14-20. Presented by CraftBeer.com—the Brewers Association’s website for beer lovers—ACBW celebrates the country’s more than 6,300 small and independent brewers with events across the nation, including exclusive brewery tours, special beer releases, beer and food pairings, tap takeovers and more.

“While beer lovers regularly enjoy their favorite independent craft beers, American Craft Beer Week is a special occasion that provides craft beer enthusiasts across the country with the opportunity to take part in a larger movement and unite for independence,” said Jess Baker, editor in chief, CraftBeer.com. “This year, we encourage beer lovers to seek the seal and remind them to support independent craft brewers during American Craft Beer Week.”

To help beer lovers brewnite this year, CraftBeer.com created a mosaic made up of beer bottles and cans from across the country featuring the independent craft brewer seal.