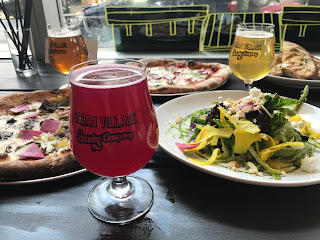 Been one year already since Urban Village Brewing Company opened in Philly's Northern Liberties neighborhood, the day before Philly Beer Week 2017 kicked off. Then, they had a car crash through the front door, unintentionally getting their name all over the news. But, the beers were already making a name for themselves. A few personal favorites included the very distinctive Beets by J Berliner Weisse (3% and full of bright red beets), Rye Bread Rye IPA (7.5% and spicy to match the name), and Oatis Oatmeal Stout (7% nice and solid stout). The Beets by J made a reappearance at Brewer's Plate in March and I couldn't have been more pleased, one of the standouts of the evening.

And here we are a year later. When I first saw notice of the anniversary party, and especially that it runs for the entirety of the weekend, I figured it'd be easy to slide it in between hopscotching between other events. When, will be the question. There's a can and bottle release on Friday, though, with my schedule and little interest in carrying bags with me, I think I'll leave these to the rest of you, maybe stopping in for a quick Birthday Beer draft prior to Opening Tap just a few blocks away. But, the Pig Roast on Saturday (with or without rain, no matter!) sounds like a good bet.

3 Full Days and 3 Special Beers … Plus a Pig Roast!

Philadelphia, PA (May 24, 2018) – Urban Village Brewing Company in Northern Liberties is celebrating their first year of business and brewing with a bang. The brewery and restaurant known for their playful beers and naturally leavened pizza opened its doors on June 1, 2017. Since then, co-owner and head brewer Dave Goldman has brewed over 1,000 barrels of beer while his partner, Tom Revelli, has overseen the service of thousands of meals, family-friendly brunches, monthly beer runs, a freak U-Haul accident that inspired the popular Wrong Way IPA and even a once-in-a-lifetime Super Bowl viewing party.

To celebrate a year of highs, Urban Village is throwing a three-day party from June 1st to June 3rd, which will include all day celebrations complete with a pig roast and special offerings of limited edition beers.

In addition to the festivities, three brand new and ultra-rare beers will be available for the big birthday. Birthday Beer will be available on tap from Friday, June 1 to Sunday, June 3. The Belgian Golden Ale was brewed with orange and juniper and fermented with Belgian Abbey yeast and aged in Spanish sherry barrels that were last used by neighboring New Liberty Distillery to finish their rye whiskey. Birthday Beer packs a punch at 10% ABV and there will be 48 bottles available for purchase at Urban for $20 each. A remainder of beer will be bottled and aged for future landmark celebrations. Similarly, Dime Piece, a 10% ABV barrel-aged Belgian Quad will be available in limited quantities of bottles over the weekend for $20 each. This Belgian Quad was brewed exclusively with PA malts from Deer Creek in Glen Mills and aged in New Liberty’s Dutch Malt bourbon barrels.

Super Villain is a hazy IPA made with lots of oats and milk sugar. It’s double dry-hopped with Motueka, Vic Secret and Mosaic hops and the result is a sweet, juicy beer with citrusy, fruit and floral aromas. Super Villain will be canned and available on June 1 at the brewery for $15/four-pack and distributed to beer stores in the region the following week. Only 250 cases will be canned and distributed.

General manager and co-owner Tom Revelli says, “We were lucky enough to be immediately accepted by the community and our neighbors and want to show our thanks the only way we know how: with killer food, great beers and big block party. We’re thrilled to celebrate year one and toast to many, many more.”

About Urban Village Brewing Company
Urban Village Brewing Company is a Philadelphia-based brewpub located in the neighborhood of Northern Liberties and founded by Landmark Americana’s Dave Goldman and Tom Revelli. This one-off concept offers tank-to-table craft beers brewed on site and brick-oven fired pizzas and artisan bread specialties prepared with natural, yeast leavened dough.
© Bryan J. Kolesar and The Brew Lounge, 2018. All content is owned and uniquely created by Bryan J. Kolesar. Unauthorized use and/or duplication of this material without express and written permission from Kolesar is strictly prohibited. Excerpts, images, and links may be used with advance permission granted and only provided that full and clear credit is given to Bryan J. Kolesar and The Brew Lounge with appropriate and specific direction to the original content. Contact Kolesar at TheBrewLounge@gmail.com