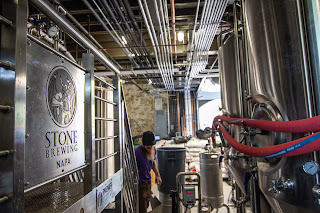 In keeping with my promise to pass more beer news and press releases along to you, here's one I recently received and is a significant one from California - specifically the southern Calif.-based Stone Brewing (though, can we say that with a brewery in Richmond, Va. and Berlin, Germany?) has infiltrated the north with an opening of a relatively small (10-bbl) brewpub in downtown Napa. Wine country? Let's say, wine & beer country.

ESCONDIDO, CA (May 7, 2018) – The beer is brewing and the doors are officially open to the new Stone Brewing – Napa, a 9,500 square-foot restaurant and 10 barrel brewery in an iconic 1877 stone building. Stone brings its flavorful craft beer to the region well-known for its amazing wine and cuisine, offering visitors locally-brewed beers, a dining experience, growler fills and Stone merchandise.

“Restoring this historic building has been a complex process which we have been careful to steward with the utmost respect,” stated Greg Koch, Stone Brewing executive chairman & co-founder. “So it is with much pride, and no shortage of relief, that we finally open the doors knowing that we took the time to do it right. Seven years after I first stepped foot in the Borreo building, this place is just what I dreamed of – a top-notch destination devoted to celebrating craft beer.”

Stone’s 10-barrel brewing system will enable the company’s brewers to continue the longstanding tradition of innovation and creativity. The brewing program will be led by Steve Gonzalez, Stone’s six-year veteran Small Batch Senior Manager of Brewing & Innovation. Fortuitously, Steve also had a former career as a winemaker, making him uniquely qualified to bring together the two industries in unique and special ways. This will manifest itself in brewing techniques that include wine-barrel aging, beer recipes that include wine grapes, as well as interesting botanicals from the region’s diverse ecology.

Stone Brewing - Napa will fill growlers and serve Stone’s year-round beers as well as special releases brewed onsite. Guest beers from fellow craft brewers will be featured in a future rotation among 24 taps of beer. Wine by the bottle, glass and on tap will also be available alongside locally-roasted coffee and all-natural craft sodas.

The Stone Brewing World Bistro & Gardens food philosophy will carry over to the new Napa location with a dining experience that incorporates artisanal products, a focus on environmental responsibility and high-quality ingredients. Stone will purchase local and small-farm organic produce from the Napa region to support its eclectic menu of world-inspired cuisine. The casual yet distinctive menu items include Spent Grain Soft Pretzels, Choripán Argentinian Sausage Sandwich, a Poke Fire Bowl, and The Stone Brewing Impossible Burger. Chef Chris Kurth will manage the Stone Brewing - Napa kitchen. Kurth is a San Diego native who has graced the esteemed kitchens of The US Grant, L’Auberge Del Mar and The Lodge at Torrey Pines.

The brewery and restaurant features two stories including an upstairs seated bar and downstairs tasting/growler fill bar, a fireplace lounge and outdoor seating overlooking the Napa River. Glass walls offer views into the brewery and expansive doors and windows create an indoor/outdoor feel overlooking Downtown Napa. The interior incorporates stone, steel and glass and embraces the imperfections of the historic building. The Borreo building, named for the family that formerly owned the stone structure, is an Italianate Renaissance design made from native-cut stone. It was completed in 1877 and has been vacant since 2001.

Stone’s new outpost is located on 3rd and Soscol Avenue serving lunch and dinner daily. Parking is available across Soscol Ave., less than two blocks away on 3rd street. Its May 6 opening is a preview of the full offering, with menu items and draft beer selections expanding over the following month. Admittedly, putting a brewery and kitchen inside a 141-year-old building posed unexpected delays and the team is ramping up service with a full experience expected in early June.

Stone’s Napa project is the first of three upcoming destinations on a mission to fight the good fight for independent craft beer. Just one week prior to the opening of Stone Brewing – Napa, the Stone Brewing Tap Room – Prenzlauer Berg opened in the Berlin city center, 53 minutes by bike from the brewery and Stone Brewing World Bistro & Gardens – Berlin. Also underway, Stone Brewing Tap Room – Shanghai is scheduled to open in China this June.
QUICK FACTS
Address: 3rd and Soscol Avenue, Napa
Phone: 707-252-2337
Hours:
Sunday – Thursday: 11am – 11pm
Friday – Saturday: 11am – 12pm
Reservations: By phone and via OpenTable.com beginning in June
Chef: Chris Kurth
Lead Brewer: Steve Gonzalez
ABOUT STONE BREWING
Founded by Greg Koch and Steve Wagner in 1996, the groundbreaking San Diego-based Stone Brewing is the 8th largest craft brewer in the United States. Recognized as an award-winning industry leader, Stone has been listed on the Inc. 500 | 5000 Fastest Growing Private Companies list 12 times and has been called the “All-time Top Brewery on Planet Earth” by BeerAdvocate magazine twice. The multifaceted company was the first American craft brewer to build, own and operate its own brewery in Europe (Berlin, Germany), and also opened a production brewery in Richmond, Virginia in 2016. Known for its bold, flavorful and largely hop-centric beers, Stone has earned a reputation for brewing outstanding, unique beers while maintaining an unwavering commitment to sustainability, business ethics, philanthropy and the art of brewing… and pledging never, ever, sell out to the man. For more information on Stone Brewing, please visit stonebrewing.com or the company’s social media sites: Facebook, Instagram and Twitter.