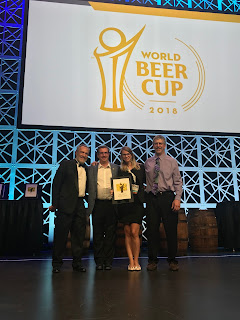 (Click above for a full gallery of pictures documenting my week in Nashville for Craft Brewers Conference and World Beer Cup.)
Am I late getting to you on the topic of the Craft Brewers Conference and the biennial World Beer Cup (WBC) that accompanies it? Depends. If you follow me on the socials, then you'd likely seen me last week chattering about bars and breweries around Nashville - the host town in 2018 - and newsy bits from the conference itself, as well as "live-Tweeting" the area breweries of interest as they won awards during the ceremony on Thursday evening.

You can read the official press release farther down below. The numbers are truly amazing. First up, let's see how our neck of the woods (as defined by PA, DE, and NJ) fared in beer judging competition against beers from around the world. Grand total for the three state region: 3 gold, 9 silver, 2 bronze)

Pennsylvania
2SP (The Russian, silver)—If, by now, you can't see this one coming, you don't know Bob Barrar. Also, gold at Great American Beer Festival (GABF) in both 2016 and 2017.

Conshohocken (Puddler’s Row, silver)—I'll say likewise about this beer as well. Have had numerous sixtels of this on tap at The Brew Lounge and I keep you telling you all about it over and over again. Whether you're listening, well.... Won at WBC in 2016 in Philly as well.

Free Will (Olly, silver)—Again, not much surprise here as one of Free Will's foudre finest. Get it at the next Sour Sunday. Or at the Souderton Theater (you'll need to see the latest news for that reference).

Iron Hill-Media (Solzhenitsyn, bronze)—This, too, is becoming a regular thing in competition. This won at GABF last year and another World Beer Cup award in 2016.

Mad Chef (Mr. Dynamite, silver)—Now here's a little secret for you. I've gone as far as to say that this is one of the best brewpubs in the region that many of you haven't been to and more say they haven't heard of. These guys, Greg and Francisco, are stand up guys and are putting out equally well-done food and beer at their little place outside Lancaster. Really, you need to listen to me more often.

Penn (Penn Gold, gold)—This is the kind of recognition that warms me. Been around for over 20 years (30?) and still winning awards. Brooklyn Lager also took home a gold medal this year proving that it ain't all about the new, flashy, and afternoon 4-pack sales. Its first gold was at GABF twenty years ago in 1998.

Rivertowne (Maxwell’s Scottish, bronze)—Another one that has graced the winner's stage; this one, a recurring seasonal, won in 2014 at World Beer Cup. Enjoy their beers at the ballpark or arena in Pittsburgh.

Roundabout (Heini’s Good Cheer, silver)—If you're in the Pittsburgh area, I wonder if you know about Roundabout. It's in the hot Lawrenceville neighborhood and along with Hop Farm, Full Pint, and Arsenal Cider makes for an excellent stroll along Butler Street. This beer won silver at WBC in 2016 and silver at GABF in 2017. See a pattern here?

Sterling Pig (Shoat, silver)—Brian McConnell and I talked about beer styles, awards, and other such topics the night prior over some Buffalo Trace late in the evening. Then I wished him well and hopes that he'd be walking across the stage. If I can do the same for anyone else, let me know.

Two Rivers (Bangor Slate, gold)—Here's a personal sin. I've enjoyed many of their beers. Heard their name called for awards in the past. I still haven't been to their downtown Easton location. That must be addressed. Soon.

Weyerbacher (Riserva, gold)—Speaking of Easton, was just at Weyerbacher a couple months ago to refresh my memory and to bring home a couple Buffalo Trace barrels (hey, where have I heard that name before). The Riserva? Long a favorite of mine and one I gushed over when judging it during the Philadelphia Inquirer's Brewvitational a few years back. Another just award. And, gold, no less. Riserva took home a GABF last year too.

Delaware
Bellefonte (Grateful Haze Porter, silver)—Now I'm getting into undiscovered territory. Heard of them, but have not yet had the pleasure of an on-site visit. So, I've got no color commentary for you.

Revelation Craft (Peach Berliner Weisse, silver)—Ditto. But, they won for their gluten-free beer last year at GABF, so maybe there's a new guard in Delaware. Someone tell Dogfish Head and others!

New Jersey
Iron Hill-Maple Shade (The Cannibal, silver)—But, no ditto here. Another solid repeat winner from the Iron Hill family and one that I look forward to every year. At Belgium Comes to West Chester event too. Eddie! This has won twice at GABF in the past and this makes the second WBC award for The Cannibal.

8,234 entries from 66 countries compete at the “Olympics of Beer”

Nashville, Tenn. • May 3, 2018—The Brewers Association (BA)—the not-for-profit trade association dedicated to small and independent American craft brewers—announced the results of the 2018 World Beer Cup Awards. The largest competition to date, the awards were presented at the conclusion of the Craft Brewers Conference & BrewExpo America® at Music City Center in Nashville, Tenn.

Beers were judged during six sessions over a period of three days by an elite panel of 295 judges from 33 countries—72 percent of whom were from outside the United States. Judges evaluated 8,234 beers—a 25 percent increase in the number of entries from the 2016 World Beer Cup. Of the 2,515 participating breweries, 807 were from outside the United States.

Out of a possible 303 awards in 101 beer style categories, 302 were awarded. One gold award was not given in Category 36, International-Style Pilsener.

“Beer brings people together,” said Charlie Papazian, founder and past president, Brewers Association. “The World Beer Cup showcases the breadth of the global brewing community and winning an award symbolizes one of the greatest brewing achievements. Congratulations to all the winners on this remarkable accomplishment.”

Average number of beers entered per category: 82 (a 13 percent increase from 2016)

Countries with the most awards:

The Brewers Association introduced the World Beer Cup competition in 1996 to celebrate the art and science of brewing by recognizing outstanding achievement. The 2018 World Beer Cup is made possible by the generous support of sponsors including presenting sponsor Krones, and partner sponsors Barth-Haas Group, First Key Consulting Inc., MicroStar Logistics, SAHM GmbH + Co. KG, and Siemens.
© Bryan J. Kolesar and The Brew Lounge, 2018. All content is owned and uniquely created by Bryan J. Kolesar. Unauthorized use and/or duplication of this material without express and written permission from Kolesar is strictly prohibited. Excerpts, images, and links may be used with advance permission granted and only provided that full and clear credit is given to Bryan J. Kolesar and The Brew Lounge with appropriate and specific direction to the original content. Contact Kolesar at TheBrewLounge@gmail.com