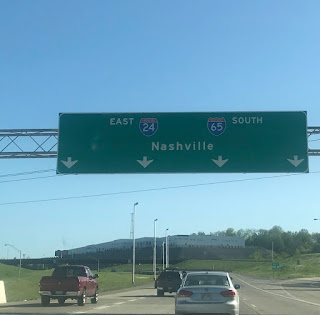 (Click above for a full gallery of mostly, but not totally, beer-related pictures in Nashville at both the Craft Brewers Conference and World Beer Cup)
Am I late getting to you on the topic of the Craft Brewers Conference and the biennial World Beer Cup that accompanies it? Depends. If you follow me on the socials, then you'd likely seen me two weeks ago chattering about bars and breweries around Nashville - the host town in 2018 - and newsy bits from the conference itself, as well as "live-Tweeting" the area breweries of interest as they won awards during the ceremony on Thursday evening.

Last week, I shared the local highlights from the World Beer Cup awards. And above you'll find a picture link to a photo gallery of around 200 pictures, mostly beer-related, capturing the week in Nashville. Sounds like a lot, but at least I whittled it down from nearly 800. That's the kind of work I put in for you 😊

The Brewers Association briefly wrapped up its take on the week. Here are some of my own takeaways from what I heard, saw, and tasted during five days in Nashville.

- Diversity. This message came through loud and clear whether it was in a keynote address, in a breakout session, or in the off-site gathering of beer writers for a three-panel symposium presented to the North American Guild of Beer Writers. Cliff Notes version? Even if we don't have the solution for the still mostly white straight male dominated industry, if we're not attempting to take steps in the proper direction, then we're still part of the problem. For myself, wheels are already turning how I can be a part of the improvement.

- NashVegas. What the heck is that? Well, it didn't take long for it to be explained to me that Nashville is a much bigger party city that I'd realized. And, as a result, bachelorette parties what seems like every night. And, "pedal taverns". Shut down Broadway to show the Predators playoff hockey game, mix in beautiful weather, 15-20 square blocks of music and "regular" debauchery (though, I quickly learned, too, that Printer's Alley is not what it used to be), and it goes to another level. Might considering tossing Orleans in the name as well to capture the party essence. Oh, and rooftop parties atop every other bar.

- Stronger Together, and Independent Craft Beer logo. This mantra and this logo were repeatedly announced loudly as antidotes to both macro tampering as well as slowing growth in the craft segment. While I've long held that the craft segment has grown as much as it has and as quickly as it has over the past 10-20 years because of the support that brewers provide each other, as well as the role of suppliers, wholesalers, media (traditional as well as social)...anyone associated with the process of getting beer from tank to glass... I've been a somewhat slowly enthusiastic adopter of the Independent Craft Beer logo that the Brewers Association created and distributed in 2017. They announced that it's been used by over 3,300 breweries (on websites, marketing, and/or packaging) and had signed up another few hundred during the conference. I *do* believe in the message, yet a label does not ultimately convey quality; not really sure there is anything that actually can do that in a decisive and conclusive manner. But, for my part, I will continue to highlight only (or, at least, mostly) the positive with the idea that there are enough forums for scuttlebutt and that the weak can fall to the wayside with their help or on their own. Also, thinking of someway to emphasize the role of Independent Beer Media as well.

- Shout-out to the local Nashville beer scene. I discovered plenty of Nashville's beer scene, but gotta say it was mostly due to my own sleuthing skills. For past CBCs, I've been contacted as part of media outreach to familiarize people such as myself with the local brewing scene by way of tours, invitations, samplings, and the like. This year, not so much. (Could be my ranking has been downgraded?!) Though, hats off to TailGate Brewery for the personalized welcome bag of beer and related accessories. What did that inspire me to do? After unpacking at the condo, TailGate was my first stop for my first beer in Nashville, coinciding with the Predators playoff Watch Party. In addition to enjoying the four canned beers - Naked Statue Blonde, Peanut Butter Milk Stout, Southeast IPA, and Welcome to Nashville Hazy IPA - later back home, while on-site at the Music Row pub location, not only did I find the Barn Out Back Altbier remarkable and the Jasmine Saison, Sake Kolsch, and Farmhouse Rye very good, I had an accidental crossing of paths with the owners/brewers from Something Wicked in Hanover, Pa. First time meeting them even though they're in my Ale Street News coverage area. Some honky-tonkin' ensued from there through late into the night. So, I won on several fronts. But otherwise I was on my own. Brewery-wise, I found my way to Bearded Iris (great, if you're into IPAs, DIPAs, DDH-IPAs, NEIPAs, seriously that's pretty much it), Tennessee Brew Works (a few great classic styles including an Extra Easy ESB "English pub style" and an American Brown called King Chestnut), Jackalope (check out their Thunder Ann Pale and Bearwalker Brown), and Yazoo (great Pilsner that paired nicely with the Beer Writers Guild meeting and in lieu of spending more time there, brought some special bottles home with me). And on the bar front, Craft Brewed, City Tap, Acme Feed & Seed, Jack Brown's Beer & Burger Joint, and Kuchnia & Keller stood head and shoulders above and demonstrated that it's a year-round thing for them and not just a CBC week condition. (The Germantown neighborhood, on the whole, is an excellent destination for eating, drinking, and walking.) You want these on your short list when exploring the Nashville beer scene. Oh yeah, and of course a few honky tonk bars were on the docket each night!

That's about it for the big headlines. Much more and I'd be getting into insider baseball territory.

The 2019 Craft Brewers Conference was announced to take place in Denver. Will I be there? Will I see you there?
© Bryan J. Kolesar and The Brew Lounge, 2018. All content is owned and uniquely created by Bryan J. Kolesar. Unauthorized use and/or duplication of this material without express and written permission from Kolesar is strictly prohibited. Excerpts, images, and links may be used with advance permission granted and only provided that full and clear credit is given to Bryan J. Kolesar and The Brew Lounge with appropriate and specific direction to the original content. Contact Kolesar at TheBrewLounge@gmail.com