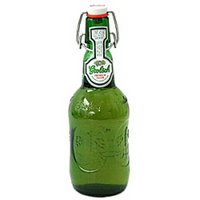 I always thought the Grolsch bottles were cool. I was at The Beer Yard the other night for a Omegang tasting. While I was there I saw a case of the famous bottles and decided to buy it. I'm hoping to use them for my homebrew. The only thing that I was nervous about was the taste. I haven't had it in so long and the case wasn't cheap. Well my fears were laid to rest. It was delicious. Keep in mind that this is not an outrageous beer. It is smooth, slightly sweet, slightly bitter and very well balanced. Kinda nutty...almost biscuity. There's something about Grolsch Lager that tastes better than others in this style. Now I remember having this beer when it was skunky too. Some might attibute that to the green bottles. Who knows. All I know is that the case I have tastes great! :-) I would put it above Fosters, Yuengling, Victory Lager, and Heineken.
Written by Adam at Sunday, November 20, 2005

Which Ommegang beers did you taste? That brewery is byfar one of my favorites. I'm a particular fan of the Three Philosophers and their Rare Vos ale

Rodenbach and Rodenbach Grand Cru were very interesting to say the least. I have never tasted anything like them! A balanced sour apple taste. There was talk of blending and old beer and new beer. I thought I was having a scotch conversation. Anyway Thanks Beer Yard!