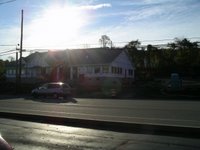 How's construction coming along on the new McKenzie Brew House in Frazer, PA? Funny you should ask. I'll post back here regularly with pictures as construction nears completion. Sorry about the sun; I'll keep that in mind for future pictures :) p.s. I scraped the following from http://www.lewbryson.com

"10/10/05: Construction has begun again on the second McKenzie Brewhouse in Frazer, PA; the brewhouse will come from the defunct Brü in Rochester, NY. Tentative opening date of February 1. AND.... 10/10/05: Brü is dead, long live McKenzie II!! Just got confirmation that the 15 bbl. Criveller system from Brü in Rochester (the former Empire brewpub) will soon be headed for Frazer, PA for installation in the second McKenzie Brewhouse, where construction has resumed and trusses are up. That's straight from Scott "Dude" Morrison, who said the roof goes on this week. The planned opening is February 1st, and Scott will be brewing at both pubs, aided by his new assistant, Ryan Michaels, who managed to escape the collapse of Valley Forge. Scott's training him up in the straight and narrow. Got this news from the Dude whilst sharing some of his Vuuve XXxXX "Belgian Imperial IPA" (very nice stuff) and Dark Saison (even nicer) at the Kennett Square Brewfest...but I gotta say: good as they were, beers like these ought to be in bottles. "Oh, I'm over that," the Dude said with his usual big grin, referring to the management decision to stop bottling. "I realized that the bottling was really cool, but it was a lot of work, and this left more time to make beer. So I'm pretty much okay with that!" Keep asking for bottles, folks."