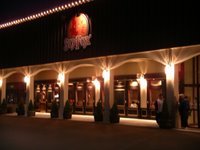 This posting has been a while in the making, considering that we made our first trip to Sly Fox's Royersford location over my birthday in early October. Now, we made our second trip last week for Patty's birthday. Although, it's actually the first trip that really made an impression on us. More about that in a minute. The new Sly Fox is a full-fledged restaurant, pub, and brewery (20-barrel). When we went in October, they were hosting a VIP party for initial investors and "friends" of Sly Fox. It was a kickoff party, of sorts, where they debuted the first bottles (all 25oz.) and gave them away as parting gifts for the guests. This was a private party complete with tours of the facility. We arrived at the tail end of the party, but when I discovered what was going on, I couldn't resist asking. And good thing I did (what do they say about "....you'll never know if you don't ask....?!) because we were introduced to Nick who took us on a full tour of the back-of-the-house operations......the tanks, fermenters, cold storage room, etc. WOW! What a change from the cramped quarters of their Phoenixville location (10-barrel). Not only are the front restaurant and bar ample in size, but the brewing area in the back is a dream come true for anyone accustomed to brewing in a claustrophobic environment. (Brewmaster Brian O'Reilly was not around at the time, but Nick did a wonderful job filling in, giving us our own private tour, answering questions, and taking his time to show us around.) In addition to all I just mentioned, they even have a large game room with TVs, shuffleboard, pool tables, and arcade games. This is perfect for kids, and adults too (!), especially while waiting for a dining room table to become available. OK, back to the beer. Between our two visits to Sly Fox in Royersford, we sampled Kulmbacher Dark Lager, Santiam IPA, Saison Vos, and Pughtown Porter. None of the beers failed to impress, although to varying degrees. During our first trip, I was so impressed by the Saison (moderately hopped with a full, tasty, but not overwhelming flavor of fruitiness and spiciness) that I asked to take some home with me.....even if to buy it. Nick took it one step further and grabbed a newly bottled Saison for me to take home. It became a perfect opening accompaniment to our dinner at Birchrunville Store Cafe last week, mmm :) The Dark Lager was a moderately dark and very drinkable beer with solid malt characteristics to enhance the body the flavor. This earned a growler full to bring home with me to drink during the Eagles game the following day (Adam, why weren't you there to help? ;-) The Santiam IPA is part of the 2005 annual IPA "project", the 8th installment. This also is a very drinkable beer with a pleasant nose, moderately but not offensively hopped. I think this has all conveyed the general theme of Sly Fox. They create some very good, drinkable, but not offensive brews. They get adventurous, but not to the degree of someone like Dogfish Head (but, then again, who is?!) I recall that a few years ago, when O'Reilly first took over brewing duties at Sly Fox, that I was rather unimpressed with what he first had coming out of the tanks. However, as others can probably attest, the quality has grown steadily over the past couple of years, even garnering some awards at the Great American Beer Festival. He really has taken the brewpub from small and underperforming to respectable, recognizable, and high-quality. Now, the only thing I'd ask is that he get just a bit more creative and aggressive with some of his recipes. (mmm, I'm hoping that the Gang Aft Agley Wee Heavy is not far away?!) Hopefully, the opening of the Royersford location will allow him the space to do this. According to their website, there's a barleywine, an oatmeal stout, and a Christmas ale in the tanks now. According to their description, it may be a good beer to model our Christmas homebrew after. Sounds like another trip to Royersford in the works! Who's ready?
Click Here For All Brew Pub & Beer Bar Reviews
Written by Bryan Kolesar at Wednesday, November 09, 2005