The Foodery in Philadelphia, PA 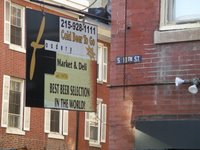 So, a funny thing happened on the way to watching the Eagles lose miserably in South Philly for Monday Night Football.........I had a GREAT beer afternoon in Center City Philadelphia (for anyone outside the Philly region, that's what most would call 'Downtown').

I made three stops after getting off the train at the Market East station. The second stop was The Foodery at 10th and Pine streets, which is in the 'Antiques Row' area of the city along Pine Street. Don't worry, you didn't miss the first stop, I'll get back to that later!

Many in inner beer circles know that The Foodery is a rarity in Philadelphia. Because of Pennsylvania's wonderful beer and liquor laws, it's quite rare to find beer (especially high-quality beer) in anything but a case (12 or 24 bottles, depending upon size). However, The Foodery has gone above and beyond the call of duty for satisfying a beer lover's hopes and desires :)

From the outside, you might almost miss this establishment. Even when inside, you're first confronted by a small grocery section. Basically, this looks like your typical bodega. What makes 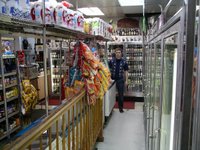 this different is that there are approximately 15 coolers full of beer that would make any beer lover salivate. (Sorry, the picture kind of sucks....nice Charmin, eh?)

And, to make matters even better, less than 2 coolers are dedicated to the generic swill. The remaining are filled with everything from local microbrews, to hard-to-find regionals from elsewhere in the country, to highly sought after foreign beers, especially Belgian.

To list individual beers is mostly impossible; so, instead I'll list the 6-pack of beers that I did purchase to take to the game with me. Rogue Chipotle Ale (22oz); La Trappe Quadrupel; Flying Dog Gonzo Imperial Porter; Abita Turbo Dog; Brasserie d'Ecaussinnes Ultrabrune; and a 6th one that I can't remember for the life of me (ugh).

The selection is great, the prices average, and the service spotty. But, when you're in Philly for any occasion and need some good beer by the single bottle, make sure that you stop at The Foodery. Oh, and by the way, when you mix and match your 6-pack selections, if you get no more than 2 of any kind, they will take 10 percent off of your bill. p.s. The single bottle selection and variety gives me a bit of the feel that I've had at Bierkraft (Brooklyn, NY), Michael's Deli (King of Prussia, PA), and D's Six Pax & Dogz (Swissvale, PA)

How do you keep all that stuff in your head? Great post man!

I just like to say, "Robert the Bruce" with a fake Scottish accent!

The Foodery is an amazing place. I haven't been there in a while, and should venture back there before the cold weather sets. I've had the LaTrappe Quad, it's quite drinkable. You'll have to tell me how the Ultrabrune is, I've never had it..