Beer Tasting: Budweiser, Bee to the What?! 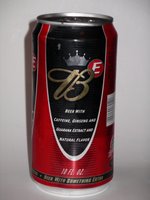 The first beer tasting of the new year is.....Budweiser's B-to-the-E (Beer plus Energy?)

No, I'm not off my rocker and this isn't the beginning of a new theme in 2006. I decided that this falls into the "Can't knock it 'til you try it" category.

Now, don't get me wrong, there have been plenty of other beers that fall into "one of the best" categories that I've enjoyed over the holidays. But, I thought this would be fun, without getting too heady, to try with our neighbors Scott and Kathleen. (Adam, we saved one for you!!)

I'm not sure the last time that I drank a beer with a "born on" date....but, here we go! After Patty and I returned from dinner on New Year's Eve, we went across the street and split 2 cans (10 oz.) between the four of us. We first had some sparkling wine. Then, I grabbed a notepad and served us each a glass of the "beverage." It's listed at 6.6% ABV.

The results were somewhat consistent. I'd say that our average response was that: it doesn't have much aroma; it barely has any beer taste components; it's not repulsive but not worth buying again.

Here are the quick notes that I scribbled as we were all tasting it.

Smell Kathleen: like Schlitz (though, I think she was joking :) Patty: extremely weak apple juice Scott: yeah, kind of like apple juice, but not very strong Bryan: not much distinctive aroma to shape your expectations for the taste (maybe apple juice)

Taste Kathleen: I like it. No, it doesn't taste like apple juice. Not bad for a hot day. Patty: It isn't bad. But, it really isn't beer. Yes, would probably be really good on a hot day. Scott: Really good. Kind of like a Stoli raspberry drink. Bryan: Not bad for a Bud product (good to see they're being "creative"). A bit sweet and tart. Can't drink more than one at a time. I also thought it was interesting that they're sold in 4-packs in 10 ounce cans ($7.50 at Michael's Deli in King of Prussia, PA; although, they are typically higher-priced than average).

For one last note, we saved one for Adam to taste. I thought it would be very interesting to try this Bud product up against one that Adam liked last week....the Unibroue Ephemere. Check back for notes. In the meantime, back to one of my favorite beers of the year, the Sly Fox Saison Vos!!

Anyway, bring that bad boy over here! I'm ready for something new.

Seriously though...can I really overlook that it is from Budweiser? We'll see.