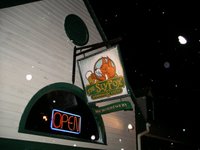 The weather outside was frightful, but WOW the beer and entertainment inside were extremely delightful! This past Saturday, Sly Fox hosted their annual Robbie Burns birthday bash. Why wouldn't we go? After all, what else is there to do on a Saturday night in the middle of January? (actually, I think this is what they anticipate in scheduling this event :) This was the first of two events that Sly Fox holds every year to commemorate the Scottish poet Robert Burns. They will host a special Robbie Burns sit-down dinner and menu on this coming Thursday January 19th at their Royersford location. 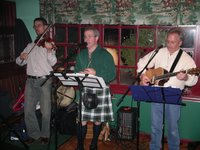 The event lived up to its billing as a night of Robbie Burns poetry reading, Haggis, Celtic music, dancing, bagpipes, and lots of kilts (on customers too)! The bar and the dining room areas were both full with revelers intent on honoring the man who wrote Auld Lang Syne. (Betcha didn't know that, eh?!) Noteworthy on the beer menu were the Robbie Burns Scottish Ale, the Gang Aft Agley Scotch Ale, a whisky barrel-aged version of the Scotch Ale, and the Prometheus smoked imperial porter. Unfortunately, the whisky-aged Scotch Ale was already kicked by the time I was ready for one :( However, I did have the pleasure of tasting it last year and at that time it instantly registered as one of the most memorable beers that I had ever tasted. I would say that the ranked order of my enjoyment for the beers that I had on this particular evening was as follows: Prometheus; Gang Aft Agley; Abbey Dubbel; and Robbie Burns. My displeasure with the Scottish Ale was surprising because I had really enjoyed it just two nights prior at Sly Fox's Royersford location. With the same brewmaster and the same recipes, Adam could only take a guess that perhaps the difference in taste and body had something to do with the draft lines. That's a little beyond my area of expertise, but it sounds plausible. Nonetheless, I brought home a growler of this beer for Adam and others to taste and we all agreed. It seemed to lack some of the "backbone" and the more fully well-rounded flavor that I had experienced earlier in the week. I'll be interested to try it again during my next trip to the Royersford location. But, on a brighter note, the Prometheus scored much higher and I was happy to end the night with this wonderfully smoky, malty, flavorful brew. Must......have........more :) Since this was my first Robbie Burns event, of course there were some lessons learned. For next year: - go for dinner and sample the haggis (Matt reports that it was good; though he says he's not experienced enough to differentiate good from bad haggis ;-) - arrive early to snag a table in the bar area to be more a part of the festivities - memorize the lyrics to Auld Lang Syne :)
Click Here For All Beer Event Reviews
Written by Bryan Kolesar at Monday, January 16, 2006

Thanks for inviting me along. Sorry I couldn't attend.

Thanks especially for stopping by with a growler of the Robbie Burns. I appreciate you keeping me in mind.

It did have a little something off, but, wasn't bad on the whole.