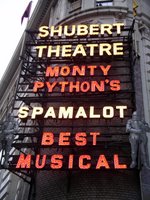 ** BEER READER ALERT** If you could not care less about Broadway musicals, then skip the next two paragraphs. (Just a public service announcement :)

This was a last minute trip to New York City as two tickets suddenly became available for the wildly popular Broadway show Spamalot. We 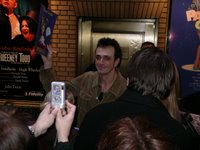 couldn't refuse. What a rollicking good time. This isn't a Broadway review site, so I'll spare you all the details of the show. Suffice to say it is highly recommended to try and score tickets which are virtually sold out for close to a year in advance. After seeing the show, it is easy to see why it's already racking up theater awards.

Noteworthy actors include Hank Azaria, David Hyde Pierce, and Simon Russell Beale. Ok, now that these beer reviews have featured the panda cub at the National Zoo and Broadway musicals, I should move on to BEER, before a revolt ensues at brewlounge.com!

** BEER READERS RESUME HERE ** :) After the show, it was across Broadway on 43rd street to the Heartland Brewery Chophouse. You may remember my comments from our last trip to the Heartland Brewery in New York City. There are 5 locations of HB, plus one location (Spanky's BBQ) that exclusively serves HB brews. There is not much to change from last review. The brews continue to be at least mediocre and the service continues to be be less than mediocre. The beers I enjoyed on this evening were (in order of favorite): Red Rooster Ale; Oatmeal Stout; Barleywine.

Then, returning to Penn Station warranted a side trip to Stout NYC. The experience here again, like my previous review, was consistent. The service, atmosphere, and beer selection were all decent and respectable. First, I enjoyed a cask-conditioned Blue Point Imperial Stout followed by a bottle of North Coast Old Rasputin Russian Imperial Stout. Both beers were a perfect cap on our 8 hour trip to the "Big Apple."

Unfortunately, at this point, it was time to find our train ride home. Oh, to only have had a hotel room for the night.....the possibilities.......next time.