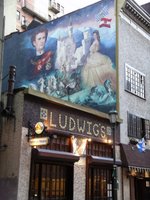 This review of Ludwig's does not necessarily correspond to a particular visit. There have been so many! However, it was my most recent stop there in November on my way to the Eagles game (American football for our non-U.S. readers) that I took these pictures and decided that it was time to "officially" write my opinions. You can find Ludwig's tucked just a bit out of the way on Sansom Street, just off the hustle and bustle of Broad Street (aka Avenue of the Arts). If you've been to the legendary (?) McGillin's in Philadelphia, then you'll be able to find Ludwig's because the two locations are almost back-to-back. Once inside, you can choose between the primary bar area and the dining room that, when open, also has its own bar area. From the waitresses in German outfits, to the tavern feel of the restaurant, to the steins and other decor behind the bar, Ludwig's oozes Gemutlichkeit. Then, comes the beer. It's always amazed me that in the Philadelphia region, replete with its 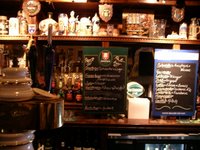 German ancestry and influence, there has not been a greater presence of German restaurants and bars. Especially in Philadelphia, with its choice of many different nationalities and ethnic cuisines, Ludwig's stands out as the best when it comes to good German food and beer in an accessible neighborhood of the city (downtown, no less). In my experience, there are always around a dozen "real" German beers on tap along with a handful of Belgians and then even more bottles from which to choose. Additionally, I can't recall when I've ever been disappointed with the manner in which the bartenders approach the beer and the serving of it. Glassware has always been attended to and chosen properly and beers poured and presented in appropriate fashion. My sense has been that beer turns over quickly enough at Ludwig's that any beer I have ever drank was always fresh. Finally, the atmosphere I referred to earlier is further enhanced by the friendliness of the staff. From the owner, to the chef and kitchen help, to the food and bar servers, I've always encountered real people who are friendly, but not overbearing......knowledgeable, but not pretentious. This is the kind of establishment where you'll find locals and tourists, beer geeks and pub crawls, old and young, professional and punk. And, as if being the best German restaurant/bar in the region every day of the year was not enough, Ludwig's also throws quite an Oktoberfest party at the end of September. It's a daylong party starting in the street and moving indoors for the remainder of the evening. Of course, they have the beer and food covered well, in addition to providing authentic live music to further fuel the party. While I didn't really go into detail on the subject of food, suffice to say that the kitchen does a decent job of turning out good versions of wursts, potato pancakes, spatzle, hasenpfeffer, and wienerschnitzel. Hopefully, this review was not too nauseating in my endless praise. I obviously have had a great deal of experience at Ludwig's and have never been disappointed. So, give it a try for yourself and see if you do not agree.
Click Here For All Brew Pub & Beer Bar Reviews
Written by Bryan Kolesar at Monday, January 02, 2006

Then, let's get going someplace....together....and we can collaborate on the post next time.....woohoo! Monk's Beer Dinner on 1/24 anyone? anyone? Bueller?!

I'm in! The calendar is open and I'm ready for something new! Whoohooo!