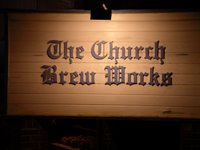 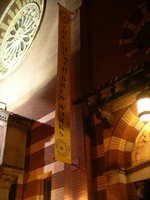 The vacancy of the former church of St. John the Baptist (circa 1903) paved the way for Church Brew Works to establish itself in 1996. It is located just off the Strip District in the Lawrenceville section of Pittsburgh, Pennsylvania. The former church is located across from the (in)famous Pittsburgh Brewing Co. (of Iron City fame). Having never seen this concept undertaken, I wonder if anyone else knows of former churches renovated into breweries, or other such business. On this particular Saturday evening, after a day full of gallivanting across Pennsylvania from Philadelphia to Pittsburgh, drinking partners Matt and Dennis accompanied me to Church Brew Works to watch the basketball tournament game between University of Pittsburgh and Syracuse University. Original plans to watch the game at Fathead’s in the South Side District were foiled (eh-hem!) Though, we did get to Fathead’s the next day. There’s a decent amount of parking behind the “church”, so this was not an issue. But, once inside, the brewpub was bustling with its typical Saturday night dinner throng. This was my fourth time to CBW and I am still impressed and awestruck when I walk through 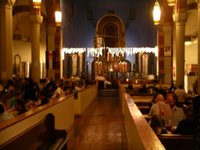 the doors. Once through the vestibule, you are greeted by a large sweeping view of the inner sanctuary. One can easily imagine how the center aisle, the pews, and the confessional used to be laid out. And, there is certainly no mistaking the former location of the alter. That’s because it is now the location of the brewing operations. Like I implied earlier, this could be sacrilegious to some. Then, when making your way down the aisle to your seats or to the bar, you can turn around, look up, and see the organ pipes still in their original location. I have never asked if they are still operational, but it sure would be cool to hear them booming out a foot-stomping German beer drinking song while sitting at the bar. You are probably wondering if I am ever going to get around to the topic at hand; beer! So, here we go. There are typically the usual suspects on tap: Lager; Dark Lager (“Pious Monk”); Pale Ale; and Stout (“Blast Furnace”). Then, a few seasonal/speciality brews will show up on the menu from time to time. The most decorated beer from CBW, based on medals they’ve won from various festivals, is the Maibock. While I’ve not had the pleasure of the Maibock, the Pious Monk and the Blast Furnace have always been consistently decent. We had these in addition to their Brown Ale also on draft. Though, I do not think I can say I have ever had a beer at CBW that has “knocked my socks off.” This seems to be due, in part, to the thinner body and the lower alcohol content. Unfortunately, the one beer that sounded the most interesting (the Cherry Quadrupel, coincidentally the one with the most alcohol and, presumably, flavor) was only available in 25 ounce bottles for $15. At this point of the night, I was not ready to make the investment or time commitment to drink it at the brewery. Maybe someone cruising through the Pittsburgh area would like to send me a care package ;-) 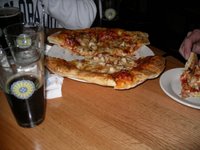 Church Brew has also made a serious investment in the kitchen, which consistently turns out some very decent bar munchies in addition to a solid dinner menu of meats, pastas, fish, and pizzas. The assortment of brick oven pizzas carries a wide variety of toppings and seasonings to provide a perfect accompaniment for the beers. By now, hearing my description above and that I have made my way to CBW four times, you can probably imagine that I recommend a visit to Church Brew Works when you are in Pittsburgh. I would probably go as far as to suggest that you have a meal to go along with 3 or 4 beers as you spend a couple of hours checking out the brewery and its environs. However, you would also be correct that I suggest you do not go there with the expectation of finding your next favorite beer. While the beers are drinkable and not in any way offensive, the real shining stars here are the architectural design and the ambience. Put this near the top of your list when visiting Pittsburgh. p.s. Though I’ve never seen it personally, there is also an outdoor “hop garden” patio for dining and drinking enjoyment on a nice weather evening.
Click Here For All Brew Pub & Beer Bar Reviews
Written by Bryan Kolesar at Wednesday, March 29, 2006