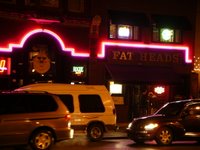 Fat Head’s in Pittsburgh, Pennsylvania. Anyone who follows the beer bar scene in the United States has probably heard of Fat Head’s. You may not have been there yet, but you most likely have read of them in a beer paper or heard of them mentioned in a discussion of bars that maintain a consistently well-developed draft list. If you have been there, then you should probably agree with my statement. 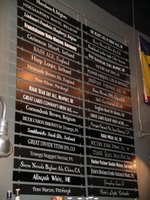 In a city with a significant beer history and current scene respected in many circles, the South Side district in Pittsburgh offers Fat Head’s with its approximately 40 draft lines and one cask conditioned offering. Plus, they recently added a second-floor merchandise and 6-pack shop (see picture at bottom).

Accompanying the fine beer list is lengthy food menu serving up everything you would expect in the form of pub grub; from buffalo wings to burgers (very large burgers) to soup and sandwiches and salads. Plus, with TVs within easy viewing distance of practically every seat, Fat Head’s is a destination for watching your favorite sporting event as well. But, back to the beer.

On this particular Sunday afternoon at Fat Head’s, our visit just after noontime still had us waiting approximately 20 minutes for a table of four. The crowd tends to cover all types from young and single to families with children. While we waited we had time to enjoy our first brew.

My drinking buddies and I started with Oskar Blues Dale's Pale Ale and Rogue Mogul IPA. It was standing room only at the bar, but this could have been partly because the ACC championship (which Duke University won) had just started on TV. We had the chance to enjoy these fine beers and check out the merchandise shop upstairs. 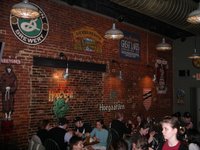 With our food we ordered the Oatmeal Stout from Erie Brewing Company, the Nugget Nectar from Troegs, the 10 Years Alt from Victory Brewing, and the Troegs Beer Union Brown Ale. No complaints were heard from anyone! The beautiful thing about Fat Head’s is that for starters it has all the makings of being just a “normal” bar. No pretentions, no 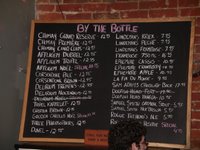 attitude, no hassle. Then, layer on the good food, ambience, and friendly waitstaff. And, for good measure, add a phenomenal beer list.

Without going into too much wordy detail (see the picture above for current tap list and left for bottle list), the available drafts will always comprise many beer styles from breweries (small, medium, and large) around the world.

In my many experiences at Fat Head’s, the beers are served appropriately and have never disappointed. Though, this time I must say that I was disappointed because I had really wanted to try two different beers which were still on the draft list but had already been sent on their way obviously with other similar beer lovers (For the record, they were Great Divide Titan IPA and Bell's Two Hearted Ale; note to self, keep on the lookout elsewhere for these beers to try!)

Short conclusion here should be obvious. When in Pittsburgh, if you visit one place only (unless you want to visit a brewery like Penn, Church Brew Works, or East End), make it Fat Head’s. You should not be disappointed. 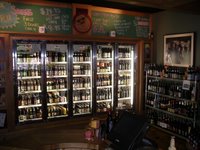 I really have to try to make the trip next year.

See you tonight at the Sly Fox! I hope you don't fall asleep in your beer after taking the red-eye from CA. ;-)

On my last trip to Pittsburgh, I stopped here twice. The first time, I took it real easy and had only 2 beers and a meal...(I was driving the rental car). On my 2nd trip, I was smarter. I had a non-drinking coworker drive!
It's a very friendly place to partake of some nice beers.