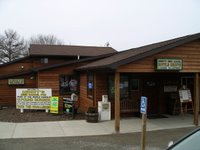 Even though this wouldn't be considered by most to be a high quality beer bar, the word 'beer' is in the name of the establishment....so, what the heck?! This was the kickoff to our Pittsburgh hockey trip to see the Flyers play the Penguins.

Approximately three hours from home to Clearfield, Pennsylvania and we were sitting in front of Troegs Rugged Trail Nut Brown Ale. There were also beers from Appalachian Brewing, Guinness, and Smithwick's. So, while the beers here might disappoint many "beer geeks," the 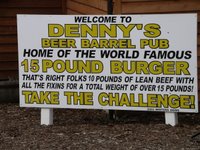 food menu here is what steals the show.

You may remember in 2005 a young college woman who finished a 6 pound burger challenge (11 pounds with all the fixings). It was at Denny's where she conquered the challenge.

While we only tackled the 1/2 pound burgers, we can vouch for the vastness and quality of the food menu. Everything is available here from buffalo wings (with at least 20 sauces), to burgers, to salads, to sandwiches, to Italian, to Irish, to Mexican, and the list goes on...... There were many TVs (plus a couple of large-screen as well) to satisfy the sports crowd.

The service on this particular Saturday early afternoon was also quite friendly. In a nutshell, this may not be a beer destination, but if you're passing through North/Central Pennsylvania and are hungry, Denny's is a great place to stop.