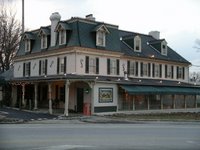 Hello? Is anyone still out there? Ok, I think I may have heard a noise....or maybe it was my own browser answering. Well, anyway, we've been up to some other work over the past week and have seriously neglected our posting duties. So, let's get this thing rolling again.

To kickstart, I have some notes for you from last Saturday's (Feb. 25th) Vertical Barleywine tasting at the General Lafayette. The General Lafayette Inn & Brewery in Lafayette Hill, Pennsylvania has been pouring quality brew for approximately ten years. It's reputation, under the guidance of Chris Leonard and Russ Czajka, has continued to grow by leaps and bounds. And these barleywines being showcased give a peek to the uninitiated into the good things going on at the General.

What does a vertical barleywine tasting look like? Well, take a 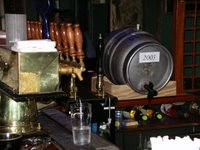 cask conditioned barrel of each of the last five years of barleywine and sit them up on the bar....tap 'em and they shall come. And come they did. By the time that I arrived around 2 p.m., it was standing-room only. But, by some stroke of luck, there was one barstool sitting open in front of the taps. I had been painting doors and doing household chores all morning, so I was happy to sit front-and-center. 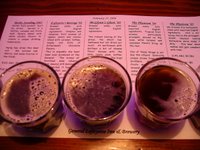 With a lineup of good brews on tap and five years' worth of barleywine to choose from, it was a difficult decision. Chris made things easy on me by spreading a placemat in front of me and serving up 6 ounces each of the 2001, 2002, 2003, 2004, and 2005 barleywines.

Hopefully, you will be able to read the tasting notes provided on the placemat in the picture to the left, along with the IBUs and ABV measures. Now I was set for the next 2 hours :)

Since I was by myself for this tasting, I decided to act the beer geek role, complete with notepad and camera on the bar. Unabashedly, I began to scribble away. But, the notes got carried away, so I've distilled them down here for you. Instead of the traditional notes on each beer, and for the sake of brevity, I've ranked the five barleywines with a brief note of the most distinguishing feature to me of each beer.

2003 McGlynn's Ghost - A moderate nose, that explodes into a fully-packed flavor bursting of rich malts, alcohol, and very noticeable and present, but not overwhelming, hop flavor
2002 Lafayette's Revenge - An extremely well-balanced beer of malt and alcohol flavors that is reminiscence in mouthfeel of a good-bodied port; very similar to the 2003, just a 1/2 step down in "wow factor"
2004 The Phantom - A softer and thinner brew with faint citrus flavors; therefore, a bit faster drinking than the preceding two
2001 Barley Standing - A bit like the '03, but with noticeable tartness; some grapefruit flavors
2005 The Phantom - A cloudy caramel colored beer with a heavy alcohol aroma and not an extremely long-lasting flavor; the alcohol brings a "warming" feeling for sure :) Young and not quite that well-rounded, but give it time!

By the end of my afternoon, I made a few new friends and enjoyed The Grim Reaper Imperial Stout (recommended). And, oh yeah, a growler of The Olde Curmudgeon Old Stock Ale made its way home with me to share with Adam (recommended, but only a pint's worth).

p.s. Hopefully, the gentleman to my right had better fortunes after his stop at the bar. He was only there because his broken-down car was towed to the service station across the street! Couldn't talk him into a barleywine or anything more adventurous than the Pale Ale.....but at least he did enjoy it.

This would have been great to attend. Ah well b-ball with the kids and some other stuff around the house comes first :-)

Thanks for postin about it Bryan. I think I have tasting notes on Olde Curmudgeon Old Stock Ale. We'll have to post that soon.