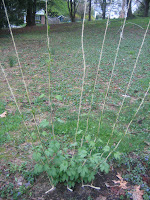 At this time last year the rhizomes were still in the fridge waiting to be planted. Where are they now? After they died back last year we pruned them to the ground knowing they would grow back this year. We didn't cover them with mulch or straw for the winter as some people do. After a bit of cold weather a late snow and a warming trend the race was on. Almost a month ago we sighted the first sprouts.

Now the tallest bines are standing three feet tall! It was June 13th before any of them were that tall last year and the Chinook wasn't among them. This year the bines are thicker, new shoots appear every day and some are already growing five inches a day. Folks we still have FIVE months 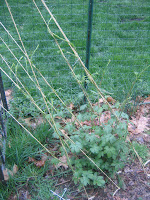 to go. This is the reason we decided not to force growth into a few of the bines by pruning all but a few of them back. We would much rather have many shoots that are shorter. Hopefully that won't decrease the hops harvest yield.

This is the second year for these plants. We will be telling an entirely different story than last year with more growth and hopefully more hops cones. Be sure to check out last year's story, we've made it easy to follow our hops as they progressed through spring, summer and into the fall.
Written by Adam at Thursday, April 26, 2007