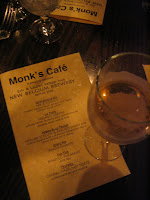 After stopping at Triumph in Philly on Tuesday, we were off to Monk's. The day was shaping up just fine. It was a bit cool, but, the sun was shining and energy was in the air. This was the first Monk's dinner we attended since the start of day light savings time. Which means it was still light! It didn't take long for us to decide to walk to our next stop. Many...many blocks later we arrived.

Up the steps and to the right. We were lured back into the dim comfortable surroundings of the front bar. What's on tap? A French beer, St. Druon Abbey Ale I hadn't heard of before and ordered it up for Bryan and I to split. Not too shabby. Light in taste, something that wouldn't wreck our taste buds for the dinner. As we looked around we noticed a few of the usual suspects. Soon it was time to get started. Time to focus on what was ahead of us. Our table was ready. The menu read...

Lauren & Eric Salazar spoke about the beer. Lauren said she would have dragged the kegs here herself if need be, indicating that participating in a beer dinner at Monk's is a huge honor.

The Springboard Ale was understated at first. Lightly fruity to start with, but, an herbal dryness to finish. I wasn't so sure I could figure this one out, but, it became more interesting as it warmed and as I tasted it with other courses. The cheese fondue served in an apple was delicious. The apple, cheese and apple skin really complemented the beer. The apple skin really accentuated the herbal tinges of the beer. Interesting.

From Bryan's notes: "aroma somewhat nondescript at first (did pick up a bit
peach in the aroma); flavor in front of mouth was kind of uneventful 'til it
reached the back of my mouth; builds through the mouth into a hairy, drying,
wormwood punch on the back corners of my tongue; certainly lingered too; thanks to Tom F. for helping me now recognize wormwood :)" 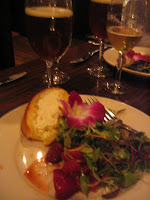 Next up, the La Folie. Keep in mind that I haven't experienced any of New Belgium's beer before. While tasting La Folie, I knew it wasn't a mistake to attend. Sour, sweet, malty and a little earthiness would summarize this beer, but, wouldn't really do it justice. Imagine a plate with tender organic greens, fresh strawberries, raspberries and blackberries alongside a slice of bread with warm goat cheese. Now imagine that the beer you are about to taste is so well paired that you savor each bite like it was your last. Greens and Beer: Dry. Cheese and Beer: Sweet. Berries and Beer: Pucker City. Mix it all together and ride the beer roller coaster through all those flavors. Oh who am I kidding? It was better than that.

Now for a double header, the Abbey and Le Terroir. At first I thought it was just one beer, but, I soon came to my senses when the second glass was placed before me.

The Abbey was probably the furthest from center in this group. That isn't to say that it was bad or somehow extreme. It was probably the least extreme tasting not sour at all. It did go very well with the short rib.

The Le Terroir took my tongue and beat it up with a sour patch kid. On its own it would be exciting. With the food, it was a wonderful hit of sour sweet to alternate with between bites. Eric's Ale suffered from coming after the Le Terrior and La Folie. I know it was good, but, I just don't remember it standing out.

From Bryan's notes: "Don't have any notes, and I don't have any permanent memories that stuck with me and the peach granite seemed to maybe too cold/frozen to let the peach flavors come out....mixed with a bit of the beer
did seem to help, but otherwise not very memorable"

Next up, the very popular Fat Tire. What can I say, it was well paired, but, again this is a beer that suffered from coming late in the show. So this is what Fat Tire tastes like.

From Bryan's notes: "Was my palate wrecked from the more complex,
palate-altering beers to that point? don't know, but I never got used to what I
always thought was a decent amber....the pheasant was difficult to eat...I'm
usually up for a challenge, but this was almost as much work as eating
crabs....the pairing, though, did seem to help bring out the fruit notes in the
beer" 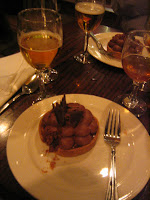 Last, but, not least, the Trippel. Well, Adam, the chef, did it again. Holy Smokes this was like a chocolate silk covered hazelnut cloud. Oh..right the beer. Yes it was good. It took a backseat to the dessert, but, definitely provided the right backdrop.

From Bryan's notes: "smooth, though thinner than I might have expected; almost held up to the rich, decadent dessert.. second best pairing of the night"

All in all the dinner was incredible. The La Folie paired with organic greens and berries was the best pairing. The dessert was the second best pairing. Monk's did it again. What a great introduction to New Belguim. I'm sold.

Until next time, Cheers!