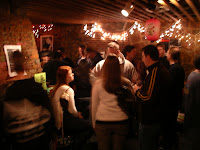 Was my skull splitten? Well, in the end, it probably is safe to say it was more split than not. (Though, not quite like last year.) But, while Sugar Mom's certainly contributed, it was probably moreso in the "post-game activities" that took me to the brink. While waiting for my train, I made a detour over to the newly opened Zot by Headhouse Square (near South Street) and partook in a perfectly poured, delectably decadent Gouden Carolus. (Note to self, must get back there for dinner sometime soon.) Then, a cab ride to the 30th Street train station and an unintentional rendezvous with the beer pest at Bridgewaters Pub yielded a surprisingly fresh, flavorful, and crisp Piraat on tap. Unfortunately, this beer had to be hurried through as the train was leaving in 10 minutes. Then, a beer on board was the ceremonial last beer of the day for me. 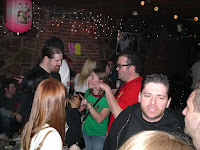 But, wait, I think I'm off topic here. Rewind 5 hours. The scene at Sugar Mom's wasn't much different than any other Split Thy Skull installment. The subterranean lair was full of the beer-loving masses who came to check out some high-gravity brews. You'll find the list below. Flights were arranged into two batches of four for $13 each. The trick is getting a little nook carved out for your group of friends. Fortunately, we had a table practically in the middle where we had decent access to the waitress on her trips to and from the bar. (Of course, it helps when I come in late and my friends have already done the table negotiating for me.) 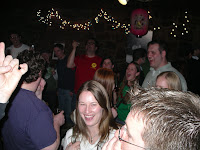 Winners for the day? Porterhouse, Stone, Yards, and Thomas Hooker. Following close behind in the middle of the pack (mostly because I've had them before and they weren't as new and wondrous as the aforementioned) included Nodding Head, Flying Bison, Victory, Iron Hill, and Sly Fox. The Heavy Seas and Middle Ages, comparatively speaking at least for me, just weren't cutting it on this particular day. 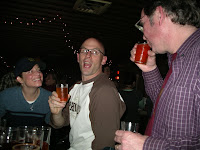 Running into old friends and making new friends is all part of the fun with these kind of events. (Nice to see you again, Tom! no, not you Tom F., the other Tom) Which reminds me, isn't Friday the Firkinteenth coming soon?!

Ah, the beauty of mid-afternoon beer event in an underground bar.