Good Beer Not A Shore Thing 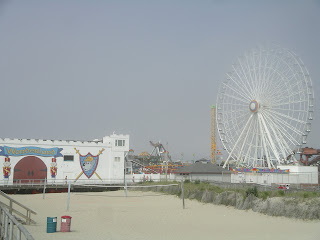 I Would Never Think of Going to the Jersey Shore in Search of Good Beer...But, it found me...eventually.

Farther inland, there's Flying Fish (might as well call it Philly, it's so close to Not Jersey...sorry guys), Triumph and River Horse a little to the north, then the concentration of good beer gets better as you head into the northern half of the Garden State.

But, down in the southeast at The Shore, things historically have not been and continue to not be so good. Mark Haynie and Lew Bryson indicate as much in their latest book, New Jersey Breweries, a great guide to the brewing scene in New Jersey. It's not as bad as some might have you believe, save for south of Atlantic City, as Mark and Lew shed light on places and happenings across the State that might surprise non-residents.

On our recent trip to Ocean City, "dry" if you're not aware, we made the prerequisite stop at Circle Liquors in Somers Point for liquid refreshments to take on to the island. I'd brought some goodies from home as well, that'd I been looking forward to some relaxing time to appreciate. Malheur Brut ($23.99), DeuS ($24.99), Super Baladin ($10.99), and Weyerbacher 13th ($?) were some of the treasures I found for decent prices. I mentioned the store after my last visit to O.C.

During our midweek Big Night Out reminiscing in Sea Isle City at some "typical Shore bars," I encountered a craft beer lover's nightmare. But, like I said in the opening line, it's not like I expected anything spectacular. Just maybe a single solitary Victory, Sierra Nevada, Sam Adams, or something widely distributed along those lines. Seems not.

When the best I could get was a Blue Moon that tasted nothing like it (was it really a Landshark instead?!) and Yuengling Lager, which I've never cared for, I decided I was the perfect candidate for D.D. On the other hand, it was a fun trip down memory lane of cover bands and beach bar debauchery, while at the same time reminding me that I'm not that young anymore. 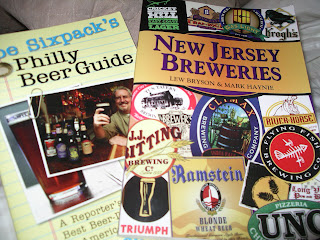 So, after finding a Sierra Nevada Pale Ale with my excellent seafood dinner in Somers Point (The Inlet) the following night, I continued the Somers Point theme and met up with resident and beer writer Mark Haynie the next day after. I needed a break from the beach and sure wasn't going to spend my day shopping. Plus, I've always said that "when I'm at The Shore, I'll look you up" so I knew I better hold true to that promise before the next Monk's dinner comes rolling around.

Mark and Mary Lu graciously hosted me for lunch and some of the best beers to be found at The Shore. I took along a very delicious bottle of '07 Gratitude from East End Brewing. Funny, the best beers at The Shore were at a guy's house! We talked about, uh, Beer, life at the Beach, and his book adventures with Lew. Good times for sure...

I took along a copy of the book with me for beach reading the rest of the week. I'd already finished Don's Philly Beer Guide earlier in the week and it was time for something new. The New Jersey Breweries book, unlike Don's where I was usually finding myself saying things like "tell me something I don't know!", has definitely given me a few new items on my Beer Scavenger checklist for east-of-the-Delaware trips.

You should pick up a copy of the book as well. See how many of these NJ sites and events you've been to. There will be more book signings in the future, announced so far are at the Marlton Borders on 9/27 and the Deptford Borders on 10/25.
Written by Bryan Kolesar at Sunday, August 10, 2008