The Worst Brew Lounge Effort Ever. Cut right to the chase, I forgot my camera. This sort of thing bothers me. Mostly because as much as I'm sure that you read and hang on every word (ha!), I know that some of you stop by just for the pictures.

Well, maybe I can make up for it with my well-manicured prose and that this time you really will read just for the words. This was actually my first sit-down beer dinner ever at The Drafting Room, in Exton, PA...and I sense that it will be the beginning of a new trend.

I've been to plenty of beer events at TDR, just never any of the sit-down dinner variety. This dinner was pulled of quite nicely. Four courses, four beers (actually six), 60 people, in two hours. It doesn't hurt that Sierra Nevada's representative, Patrick Mullin, can work a crowd with the greatest of ease.

After casually being served our Southern Hemisphere welcome beer along with the bite-size appetizers, the mingling in the main dining room came to an end and everyone settled into their seats. The grilled St. Andre cheese with blueberries was served next along with the Chico Estate Harvest IPA (one of three kegs in Pennsylvania, if I heard correctly). This beer, tough call, but I'd say was my favorite of the evening. There was a unique earthy flavor that I never got around to discussing with Patrick.

That's when Patrick introduced himself to the packed room and got started on the history of Sierra Nevada and even wandered down the history of beer road all the way back to Pliny the Elder himself. It took all of about 30 seconds for Patrick to have the crowd toasting, laughing, and applauding.

Which reminds me...the last sit-down, "lectured" event that Patty and I attended was a wine tasting at Morton's. Lovely wine and all. But, the stuffy crowd? bleh. Last night at TDR, tables for six and eight patrons were scattered around the room, ensuring that strangers were bound to sit together, just as at our wine-tasting event at Morton's. The biggest difference was that at TDR, the attendees genuinely and outwardly appeared to be enjoying themselves. I have little doubt that the winos were enjoying themselves as well, but it just seems that they've been trained to not effusively show it. It took going with two others from Morton's to Monk's Café to find out that they had some real personality.

Okay, enough wine-bashing for today. (And, this is coming from someone who really, really enjoys wine....but, let's save the rest of that conversation for another day.) Back to beer...Then, we hit the jackpot. Three years of Harvest Ale (aka Yakima) were presented to us with the lamb entrée. Not three, or five, or 6 ounces...but, ten ounces each. Yikes. Any sign of palate fatigue from twenty ounces of hops assault that wasn't already being experienced was sure to set in after this course, right? Well, sort of. Sixty ounces of hop perfection was the total tally of hops intake by the end of the evening, but remember that this was certain to be a night of hops education.

Tasting the Southern Hemisphere next to the Chico(s) and next to the three vintages of Wet Harvest ales (2006, 2007, and 2008) was a study in different levels of spicy, citrusy, piney, and earthy aromas and flavors. For the record, at least in my book, the 2006 was the most balanced fresh hop treat, the 2008 gave the biggest hop punch, and the 2007 left the smallest impression on me.

Of course, I'd be remiss if I didn't mention the dessert. Yes, we can put this in the books as a successful beer dinner because it passed the final test...the last course of the night. The bread pudding was just as you'd expect it should be. Delicately doughy and tantalizingly sweet. Ordinarily, I may not have wished to pair this with an IPA, but on this night with Sierra Nevada in the house, it just seemed right.

All of these beers were pouring from 1/2 barrels, so you should still be able to find them at The Drafting Room for at least a short bit longer. Kudos to the front of the house service (table staff as well as bar staff led by Heather Higgins and Sean MeGettigan) and the kitchen staff led by Chef Theo Charitos; they sold me on their beer dinners (not that I'm surprised) and I'll be sure to return for the next one.

I'm leaving you here with the menu and then the worst pictures (from cell phone) in the history of The Brew Lounge. I'm sharing them with you because in case Patrick needed an alibi for last night, this picture does nothing if not prove that he was there. Plus, I think he might prefer the picture this way ;-) 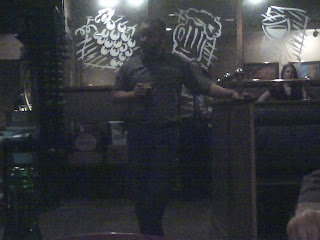 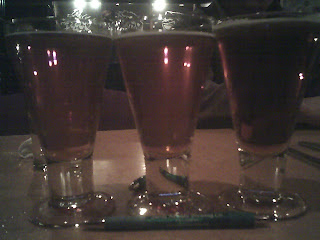