This is going to be awkward. This is a bit of a departure from my standard m.o. since I've never been much of one to tell of beer that I've been gifted that you may never have the chance to drink. Unless there's a compelling story (i.e. something in it for you) to share with you about a beer, I often err more on the side of humble. Could be the less-showy Mennonite side of my family (you didn't know that, did you?) coming through, could be the local Quaker influence, could be.... Maybe that's why the beer deliveries from breweries have slowed over the years. I simply won't take a beer that shows up on my doorstep and write about it just because it did. The marketers don't seem to like that approach. Unless, of course, there's useful news that I feel is shareworthy...and from what I hear, I believe that many of you appreciate this philosophy. You'll need to look elsewhere if you want to read about the shiny box and packaging, the cute bottle opener, geegaws, and glassware, etc. Anyway, to the point Bryan....please....right? Case in point, this week seemed to be all about the barrels...at least at two leading area breweries with long histories--Dock Street and Victory. Both decided to do a little pre-Thanksgiving dabbling in special one-off releases and both seemed to have created quite a stir in the market. And, yes, they do represent beers that many of you will never have the opportunity to taste, or at least not the first run of the beers, if they should indeed come to a second batch. But, that's certainly putting the cart before the so-called horse. The Dock Street release of its Saison was much more limited in production than that of Victory's Dark Intrigue. First, to Dock Street. I stopped in Tuesday night and met up with some friends to share a table for pizzas and beers. As much as I was looking forward to the Saison release, the Bohemian Pilsner recipe specs seem to be right back to where I like them and two glasses of this pleasantly-hopped pilsner is exactly what a dish of pizza screams for at Dock Street. If you go to Dock Street have the stout, the porter, a Belgian-styled ale, of course, but make sure you leave room (preferably to start) for at least one glass of the pilsner. I think you'll agree that it continues, after all of these years, to be one of the region's finest (on the right day, I may even argue it as a contender for top 10 in the country, by style). Oops, another tangent, sorry about that. The Saison, yes the Saison. Until a polite, but direct, letter came through from Belgium's Brasserie Dupont claiming Dock Street's naming of this very limited, one-time only, beer was too close to their own for comfort, it had been known as Saison DuPotts (an homage to its maker, Ben Potts, yet alas striken from the record). So for now it is known simply as Dock Street Saison. No matter, the beer was 100% brettanomyces-fermented from a single cell found in the remains of a Fantôme bottle before being bottle-conditioned for final packaging. Some bottles made it out to Grey Lodge, some to Hawthornes, and some to The Foodery. A few of the remaining 42 bottles (3 1/2 cases of bottles in total) and a pin remained at Dock Street for their unveiling of this beer. That's it. The night appears to have worked out fairly well. I say well in the sense that the amount of beer available for sale was known, the price was set clearly and simply, and limits were reasonable. In fact, I think it could even have been argued, given the extreme limited amount released, that a one bottle limit would have also been reasonable. The beer, ah yes let's get to the beer already. According to my notes: A bit thin, apple and pear fruit notes, slight hint of lemon zest, pronounced apple brandy from the barrel-aging, and subtle brettanomyces funk define this beer at the current age. From the pin, the beer was a bit undercarbonated but didn't bother me too greatly. I was promised that in the bottle given to me for later enjoyment, the carbonation would not be an issue. Aside from the carbonation, I will be greatly interested to see how this beer further develops in the bottle 6-12 months from now. For however many disappointed craft beer lovers left Philly without a taste of this beer, the real uproar came in suburban Downingtown, home to world-class Victory. Here, on the other hand, details were a bit fuzzy, at times contradictory, leading up to the highly-anticipated release of a beer six months in the making at this world-class brewery. The slightly-more-complicated pricing structure seemed to get lost a bit in translation between the bar, the retail shop, Facebook, and the press release and it created some bewilderment amongst customers. 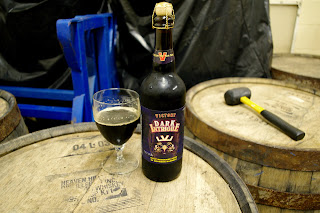 One of the seemingly more bizarre points of the pricing structure was the one that gave greater-than-usual discount for buying by the case, reducing the per bottle price by 33%-50%, depending upon if the single bottle was purchased from the bar or the retail store...yet, two other price points. With 80 cases available for sale at the brewery, it's not difficult to believe the reports that virtually no one walked out of the retail shop with anything less than a case. But then we get to the part of the story where we ask "who really needs that much beer"? Particularly in the world of craft beer and special one-off releases where, at least in beautiful memories of (long ago?) days gone by, it was not unusual to hear of good samaritan tales whereby beer lovers would sooner share the wealth with his/her fellow craft beer aficianado, lest they be accused of not respecting beer...or something to that effect. Now, granted, I can not say how many of the 80 cases that walked out the door were tagged for trading and secondary market selling of which I have very little patience for. On the other hand, I'm betting that there were a fair number of cases that went home with the designee in a group of friends who was later going to split up the case 2, 3, or 4 ways. Fine. But, if anyone walked by the long line of disappointed faces at the brewery and took all 12 bottles home to put on their shelf, simply because it made more economical sense and "the limit was 12, dude...I'm just playing by the rules; I didn't set the rules", then I say....seriously? Again, to the beer, ah yes, the beer. I arrived after my work day expecting to find a depleted amount of bottles available for sale, but still some on draft. I quickly learned that all 80 cases sold out in 45 minutes and that none had been put aside for the bar's draft service. Reportedly, the first person was in line just after 7:30am. Wait, did I say "to the beer"? Yes, what about the beer? Okay, here we go again. I was invited to stop by and have a taste of the Dark Intrigue with some other guests and the brewer/head barrel guy in charge, Frank Iosue. He got the go-ahead earlier this year to begin work with the barrels. What is Dark Intrigue? Simply, it's Victory's outstanding Storm King Stout aged for somewhere, I believe he said, around 97 days in Heaven Hill Kentucky Bourbon oak barrels. 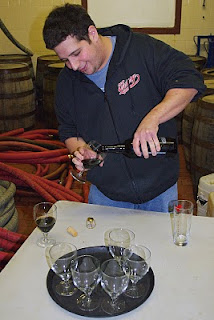 This beer is ready to drink now; if you are fortunate to have a taste or two, I would recommend taking the time. If you think the Storm King is too hoppy, you'll be pleased with how the barrel-aging has softened the Storm King's hop impact a bit. If you typically shy away from bourbon-influenced beers, don't worry, the Dark Intrigue features the wood and bourbon as a component of the beer, not a defining characteristic. Simply put, this is one of the more nicely balanced bourbon barrel-aged beers that I've tasted in a while. And, it's in the 10% ABV range, so you'll notice that warm, relaxing feeling in no time. That should come in handy as winter temperatures begin to creep in to the northeast. Great job to Frank Iosue, Clay Brackley, and the rest of the team responsible for putting this Dark Intrigue together. Trusting that Victory will iron out the sales and distribution issues related to this special one-off, this initial foray into the wood portends great things should they choose to include barrel-aged beers as part of their ongoing lineup of fine brews. So I said I'd only mention beers that I was fortunate enough to taste if I had a takeaway for you. Here they are: Takeaway #1: If you get a chance to try the Dock Street Saison some time next year from the bottle, you'll probably be in for a tasty delight. In the meantime, though, head to Dock Street...grab a pizza...a pilsner or two...and maybe a growler of something else to take home. Ben Potts, Justin Quinlan, and the whole crew are hitting on all cylinders as well as they ever have. Takeaway #2: With exclusive, special, one-off, super-duper releases, plan to be disappointed if you don't get the beer you were hoping for. Be disappointed, but don't be irrational. Remember, in this incredible age of craft brewing that we are currently enjoying, the next great beer is just around the corner. Patience, grasshopper! And, if you're one of the fortunate ones...share, don't hoard. Oh, and do call around...there is a limited amount of Dark Intrigue sure to show up on some of the better beer retail shelves. But, as "they" say, act quickly, supplies are limited. Happy Black Friday....which reminds me on one Final Takeaway (#3) of the day: The family of Memphis Taproom, Local 44, and Resurrection Ale House are all offering up a complimentary glass of whatever beer is currently on the beer engine when you go in to purchase a gift card during this holiday season.
Written by Bryan Kolesar at Friday, November 26, 2010

At Dock Street, we just barely got one of the last bottles around just ten minutes after it went on sale.

There are still some bottles floating around town. As of last night the foodery had it, and as of this morn the Grey Lodge still had about 6 bottles.