Beer cocktails? The time has come 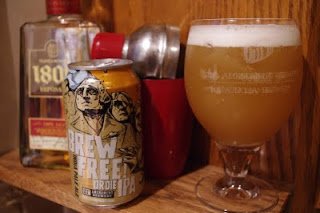 I've typically eschewed the concept and the practice of "beer cocktails". Certainly, a beer -- after being crafted from multiple ingredients -- could not be made any better by mixing it with other liquors, juices, and what-not. Right?

Then, someone who knows a thing or two about our beloved beer and many other things food- and beverage-related, Ashley Routson aka The Beer Wench, posted a recipe that she stirred up at home.

After reading, then re-reading, I had my epiphany. Many of us talk affectionately about cooking with beer -- adding it to chilis, sauces, and the Thanksgiving turkey just to name a few common uses. In most cases of cooking with food, how much original beer aroma and/or flavor remains in the final food product once plated? Typically, not so much as to be obviously noticeable.

So then why should I get so preachy against beer cocktails where the beer plays a role, but may not be the lead player? The recipe that The Beer Wench passed along called for a hop-prominent beer. She used Brew Free or Die from 21st Amendment; I am quite familiar with this lovely beer and had a can that I could use (their new Hop Crisis was the backup).

I like Tequila and we'd just bought a new bottle of Reposado, coincidentally once again just what the recipe called for.

After shaking together and serving over ice, the result did not disappoint.

All the in-your-face hop bitterness from the beer was diminished but still noticeable. The Tequila made sure of that. But, like in a margarita, the Tequila can be adjusted to be more or less recognizable.

Offsetting these two bold flavors were the lime juice which added just a bit of bracing tartness and the agave with a touch of sweetness.

So basically it was an almost-margarita with an undercurrent of hop bitterness and pretty darn refreshing. It's opened my mind to new possibilities.

Hop over to The Beer Wench's site for the full recipe.
Written by Bryan Kolesar at Monday, July 25, 2011