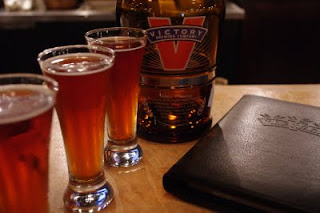 ('10, '09, '08 Old Horizontals lined up for inspection at Victory Brewing Company in Downingtown, Pa. during Christmas in July)

Learned a few things at Monday's Christmas in July day-long event at Victory Brewing Company in Downingtown, Pa. Nothing particularly earth-shattering, but tidbits, nonetheless, here and there. Well, I didn't stay day-long, only long enough to sample all three (plus, for full disclosure, a little taster of Strangeways, an English session ale served on nitro) and order a pizza to take home for dinner.

- The three vintages of Old Horizontal, '10 '09 and '08, came across pretty much as expected. Meaning that Old Horizontal, stored properly, should be a fine drinking barleywine still several years after bottling. The '10 had the most noticeable hop presence whereas the '08 appeared sweeter and boozier and a smooth sipper. The '09 was in between on both accounts and the more balanced of the three. All three would have made fine growler accompaniments to Ommegang this upcoming weekend. I, however, had one choice to make, and it was the '09.

- An $11 growler fillup of vintage Old Horizontal is indicative of the year-round prices that make Victory growlered beer to go one of the best deals in the region.

- Also catching my eye (or both of them) on the menu was an interesting-looking brie and asparagus pizza with roasted peppers and ricotta cheese....and the sandwich section, where there's one named after employees Whitney Thompson -- The Whitney, something that looks kind of like a Turkey Reuben -- and Scott Dietrich -- as in, The Dietrich, also reuben-esque. No one was revealing whether The Jerk Grinder was named after anyone ;-) 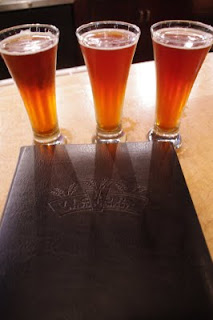