Just a few words here (yes, this is in fact Bryan speaking!) about last night at Station Taproom in Downingtown. WXPN's David Dye is in the middle of making rounds throughout the Delaware Valley to promote the station's 20th anniversary and showcase Philadelphia Brewing's Broadcaster Brown Ale that they brewed to commemorate the landmark date.

The beer is tasty, quite drinkable (5% ABV) throughout the Phillies game (which you do realize, correct?, that Station Taproom is a great neighborhood joint to watch a game at), and a nice roasty, slightly hoppy, with a dry finish-brown ale that I would want it to be.

The scene was perfect. From 5 p.m. on, the crowd continued to grow and fill the room — first, with Phillies fans. Then, with WXPN fans. And scanning the crowd showed that this was not necessarily a beer geek crowd, but a crowd of the pub's neighborhood friends who, oh by the way, just so happen to enjoy good beer as well. As they say, the hard-core beer geeks ain't gonna pay the mortgage.

You've still got some time to track down both David Dye and this beer tonight and tomorrow night. Refer back to the posting I made with all of the dates.

Here are a couple of pictures from the gathering last night in Downingtown. Oh, and please notice the correct spelling of Downingtown, not Downington or some other bastardization. 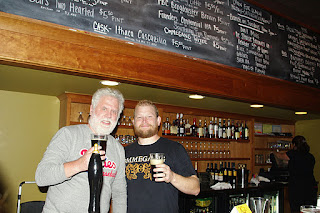 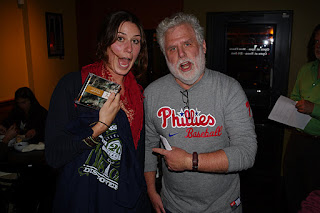 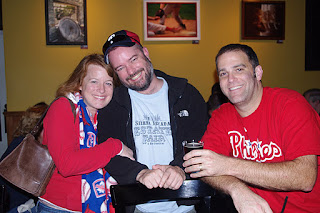 (Yours truly, right—in case there was a question—and the First Couple of Sierra Nevada in southeastern PA, Patrick Mullin and his lovely wife Tracy)