We had 'em smoked every which way at Yards. Quick jump over here for 40 pictures from the event. 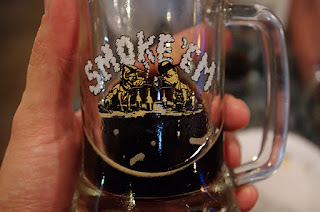 (Excellent glassware as always at Yards events. And, guess what? Attendees don't smash them at the end of the session!)

A little late with this wrap-up (yeah, like nearly 3 weeks late...so, let's get on with it, eh?!), but must do my part here to reiterate the claim for this event as a top 10'er every year in the Philadelphia region. A destination beer event, if you will. One that you take the afternoon off from work to attend. Maybe include a stop at Standard Tap just a few blocks away. 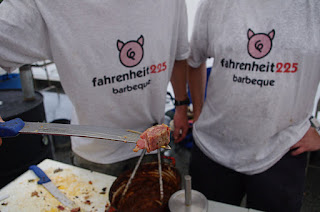 This year's Smoke 'Em If Yous Got 'Em event was much like the previous ones: smoked meats of every type; smoked beers ranging from where's-the-smoke to Holy-Smoke!; live music; and great times with like-minded folks. You should hear what we say about the unlike-minded folks. 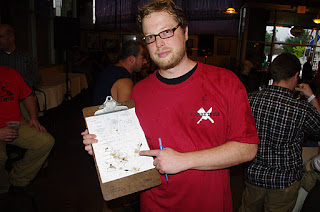 The only difference this year was that there was more. More meat (a dozen amateur competitors, plus Percy Street, Brauhaus Schmitz, and The Smoke Truck), more beer (nearly 20 breweries worth of smoked beers in varying intensity). And I, as one smoke-beer, smoke-meat lovin' guy, couldn't have been happier.

There are a few pictures here; the remainder are shared over at Picasa via this link.

I stopped in with Adam The NonConFermist courtesy of an invitation from the brewery. That, as you should come to expect by now, in no way influences my opinion of events at Yards. My affection for smoked beers is well-documented. And, well, Yards has the right facility for hosting large events in a space that comfortably accommodates the throngs of beer lovers. 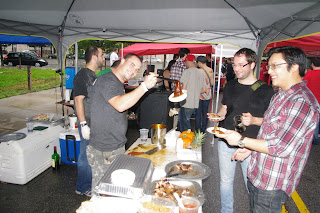 (Master Basters at work putting on a show of great barbecue)

Master Basters justifiably took first place. If there was a prize for most creative name, they likely would have won in that category as well, but perhaps only narrowly over Grill on Grill Action.

Finally, I shouldn't close without recognizing The Smoke Truck. The already much-lauded Smoke Truck gets a few more points for hooking up Mrs. Brew Lounge, who drove through the torrential downpours to pick me up on the way to The Shore. A bowl of sauce to accompany a mound of succulent pulled pork and a large bone of meat. Made the late-night trip to The Shore just a little easier. Easy on the double entendres kid.