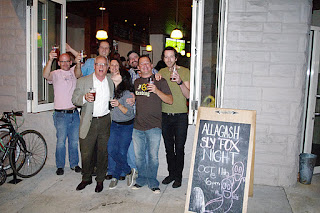 (sorry, that was the most clever Washington/Politics reference I could come up with today)

Ms. Woods is a downright likable beer personality. You'll hear me saying that about so many in the "craft" beer industry; but, then again, it's true and also what makes covering the industry, the happenings, and the people so darn interesting and fun.

So as Suzy moves on from Sly Fox to Allagash, where she'll be covering the latitudes from Philadelphia down through DC and Northern Virginia as their mid-Atlantic Sales Manager, Resurrection Ale House threw a little "going away" party for her a couple nights back.

As a testament that Woods is not only likable to those such as me on the middle-to-outer rings of the beer circles, some fine representation from her old and new employers showed up in support.

Since it's always better to quote than to have you listen to me. So here are some words from Suzanne:

"Long live the cans. I am so proud that Sly Fox is the MidAtlantic pioneer of the craft can movement. I had too much fun selling it! After five years I moved on to another amazing brewery. I'll be drinking my weight in White from Philly down to DC. I don't think I have a day off 'til Thanksgiving but that's alright. I am honored to be welcomed into such a wonderful company."

In the picture you see here, and it's nearly impossible to say left-to-right, so I'll trust that you either know who's who, or maybe don't care. Brian O'Reilly (head brewer), Tim Ohst (Brewer and Head of Brewing Ops), and Corey Reid (bartender, Sales Guy, and Kan Jam Koordinator) all showed up from Sly Fox. From Allagash, Naomi Moore, National Sales Manager and Woods' new boss, was in attendance. Strangely absent (given his propensity to be found year-round in these parts!) was Rob Tod. Just kidding...sort of.

Suzanne works as hard, if not harder, than many at bringing the message of great beer to "the people". Sly Fox will miss her and Allagash should surely benefit. You may see a little less of her around Philly, but that'll be a good thing for Baltimore and DC. Plus, it'll mean seeing Corey Reid a little bit more and that's alright too.

Continue following Suzanne wherever her travels take her via BeerLass.com
Written by Bryan Kolesar at Thursday, October 13, 2011