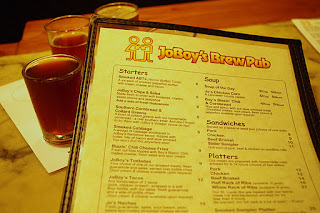 Imagine yourself on the Pennsylvania Turnpike heading east or west somewhere between Harrisburg and Reading. You're hungry and want to make a pit stop along the way. You're near the Lebanon/Lancaster exit and decide to head south on Route 72 in search of food.

You smell something good (refrain from making Pennsylvania farmland jokes here). It could be beer or it could be barbecue. Chances are, it's both.

Within six miles, you'll find yourself in the heart of Manheim and at the doorstep of JoBoy's Brew Pub. You likely will not smell the beer being made from too far away, considering the brewpub's system is one of the smallest in the region.

Jeff Harless, co-owner, brews on a 1/2 barrel system in the kitchen and must brew near continuously on the small system in order to keep up with demand at the bar. What all that hard work means is that you're even more guaranteed to have more fresh beer made more often mere feet away in the not-too-small, yet cozy, brewpub.

Jo Harless, wife of Jeff and co-owner, was behind the bar when I stopped in along my way home from Hershey and the sneak peek at the new Tröegs brewery. Reports of the couple's friendliness did not go unnoticed from the moment I walked in the door and sat at Jo's bar. She started me down the road to gustatory delight with a review of the food, beer, and wine (mostly Tamanend and Waltz wineries) menu.

Jeff brought his barbecue recipes from his native North Carolina to use in the former Summy House which he and Jo opened on 4/1/10 as JoBoy's Brew Pub. Fascinating artifacts of the building's history hang on the walls and contribute to the comfortable feeling at this small town brewpub. 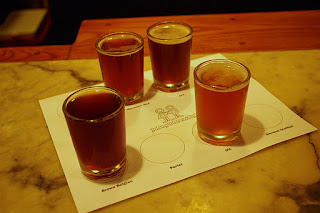 The beers I tasted were all quite good and satisfying. The average appears to fall in the 5.0%-5.5% ABV range which is nice for a few reasons. For my own selfish reason, I still had nearly an hour to drive home. But, the main advantage I see is that at this "sessionable" level (let's see if anyone comments to dispute my sessionable tag!), the beer can be very good yet not too much to get in the way of the incredible food on the plate.

The beers cover many of the basics from Hefeweizen to hoppy IPAs and peaty Scottish ales to Porters. Throw in a Pale Ale, a Blonde, and the very popular and dependable Manheim Red along with an occasional Barlyewine, Russian Imperial Stout, and fruit beer to make things interesting as well.

I'm not sure that they need to make the claim they state on their menu, since it almost sounds apologetic and, after tasting several of their beers, I don't think they need to make apologies. "While we make no claims to brewing the best beer you ever had; we can promise hand-crafted beer that focuses on quality and that pairs well with our barbeque." Well, as debatable as the first part of the sentence may be, perhaps more importantly, at least the second part of that sentence accurately resonates from the kitchen to the table. 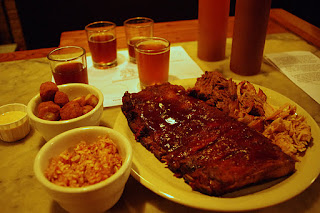 But, the food. Oh my, the food. Even though I wasn't famished, in my effort to pick "just the right food" for this one initial trial visit to JoBoy's, I landed on the overflowing Smoked Sampler Platter complete with a generous 1/2 rack of ribs, beef brisket, chicken, and pulled pork, two sides, and complementing sauces for the meats. I'm not sure why I skipped the Atomic Buffalo Turds (smoked jalapenos stuffed with bacon and cream cheese), collard greens, baked beans, hush puppies, mac-n-cheese, or cornbread. But, I opted for the equally-pleasing slaw and fried okra. All for twenty dollars!

The best beer to pair? The porter was pretty decent, the Manheim Red was malty enough to do the trick, and the IPA not too shabby in its attempt to work with the various meats, slaw, and fried okra. Pulling in a close second as the best JoBoy's beer to pair with any of the barbecue items was the Brown Belgian Abbey with its noticeable but mild spiciness and strong roasted malts. But across the board (or, I should say, platter), the Scottish Ale with its mild smokiness was just the right beer for the job.

I was a day too early for the unveiling of a 10-month-old aged Russian Imperial Stout. After bringing some leftover ribs home for Patty and hearing her reaction to the food, we may be returning much sooner than I expected and may have a shot at trying this beer.

Asking around, I was a bit surprised by an under-awareness (both from industry folk and consumers alike) of JoBoy's. What about you, my fine guest at The Brew Lounge? If you've been to JoBoy's, what was your reaction? And, if not, how long will it be before you test out my observations?
Written by Bryan Kolesar at Wednesday, October 19, 2011

Email ThisBlogThis!Share to TwitterShare to FacebookShare to Pinterest
Categories: Beer and Food, JoBoy's