-->A link to the Philly Beer Week Index

The beauty of doing a Philly Beer Week wrap-up is that there's almost no way in which I, or anyone else, can be wrong in my assessment. After all, with an average of 80 or so "events" a day (and let's be honest, after five years, there are still quite a few questionable "events" on the calendar, but let's move along), no one will or can see it all to render an opinion on how the whole of the day went down.

Here, then, is my account of the fourth day, June 4, of Philly Beer Week 2012 based upon my whereabouts. To the extent that I have credible second- or third-hand accounts of the day, I'll be including them in each day's wrap-up as well.

Some brief notes in no particular order other than perhaps chronologically.

~ This daily wrap-up will be pretty easy, and brief. I'd considered taking the whole day/night off from PBW considering the first three were filled with plenty of walking, eating, and drinking in addition to work around the house. Tiring for this middle-aged guy ;-)

~ But, with some last-week-details to clean up around Dock Street for my 5-K race, Patty and I loaded Callie ("the pup") into the car and ate dinner at Dock Street. Surprisingly, we were not the only table of people eating outside in the drizzle. Pleased to announce that there are only 15 spots left before we hit our max of 400 registrants for the run. Quite gratifying indeed. And, the course is looking in great shape as of last night.

~ Did I mention that this was the third of four PBW days thus far that it's rained. And, we're not just talking the gentle, pleasant light rain shower.

~ After indulging for the first time ever in a meal at Dock Street that did not include pizza ("fish and chips" is a very good plate of food at the brewery) and a glass each of Johnny Berliner and Summer Session (each quite solid), we moved along down the street for a quick stop at Local 44.

~ I'd figured that the event with the Lavery Brewing Company folks (say it with me: Lav-ree. Not Lave-r-ee) from Erie, Pa. would have been long gone. But, apparently they never showed. So instead I checked out Local 44's adjoining bottle shop on Spruce Street for the first time and took home a bottle of the reportedly-pretty-good Liopard Oir Farmhouse Ale for a seemingly-reasonable $10.50. Looking more around the bottleshop had me homesick for the Lambic prices in Belgium.

~ I understand not long after I left, Tomme Arthur stopped by for a visit in conjunction with the Lost Abbey event that kicked off around 8 p.m. or so.

~ We were so close by that it only made sense to stop in at City Tap House to see what may have remained from the Goose Island event that Andrew from the brewery attended in place of founder John Hall, who had broken something (foot? leg?) in the week prior to PBW and was unable to attend.

~ A surprise was to discover that dogs are permitted on the terrace. GM Andy Farrell added that there will be an upcoming dog-themed event in the next month or so, which will include a "bring-your-own-dog" option.

~ He also shared some details for the new PEnnsylvania 6 (as in: the old Philadelphia phone exchange, PE6) coming later this fall to 12th & Sansom Streets from the same owners that brought us Public House and City Tap House. The location most recently housed the short-lived restaurant Tweed.

~ Hanging out with the pup on the terrace with a Bourbon County Brand Stout and a Juliet was the order of the last stop on our mini tour and we were off to call it quits on our makeshift day 4 of Philly Beer Week 2012.

~ Pictures are too few to bother linking over to Picasa, so here they are for you, as uninteresting as these might be today. Tonight, back in the saddle with a happy hour at Nodding Head at Messers Home Brew Chef, Calagione, and, I'm betting, a bunch of others. 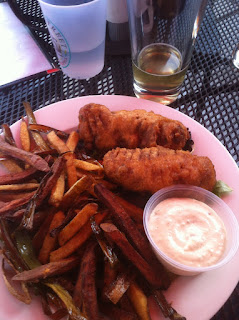 (Fish and Chips, well Trio Fries to be more precise, were excellent at Dock Street. Perhaps the first time I have not ordered a pizza.) 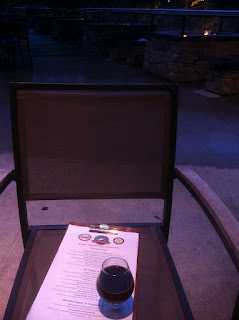 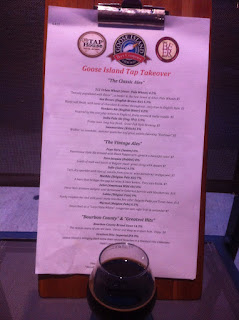 (Quite the lineup of Goose Island goodies at City Tap House) 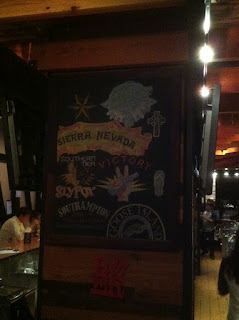 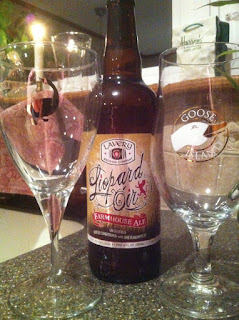 (From Erie, Pa., the relatively new Lavery is now in Philadelphia, here at the Local 44 Bottle Shop with its Liopard Oir Farmhouse Ale — a spring seasonal — accompanied by some fine Goose Island glassware courtesy of City Tap House)