-->A link to the Philly Beer Week Index

The beauty of doing a Philly Beer Week wrap-up is that there's almost no way in which I, or anyone else, can be wrong in my assessment. After all, with an average of 80 or so "events" a day (and let's be honest, after five years, there are still quite a few questionable "events" on the calendar, but let's move along), no one will or can see it all to render an opinion on how the whole of the day went down.

So, instead, here is my account of the sixth day, June 6, of Philly Beer Week 2012 based upon my whereabouts. To the extent that I have credible second- or third-hand accounts of the day, I'll be including them in each day's wrap-up as well.

Just a few pictures to share, so no need to link you out to Picasa for that. See below for a handful of pictures from The Drafting Room and one of the peripatetic Richard Ruch.

And, now, some brief notes in no particular order other than perhaps chronologically.

~ To say I'm exhausted would be an understatement. After two weeks in Belgium (which, surprisingly, didn't take as much out of me as I thought) and spending the last 7 of 8 nights in Philadelphia doing some form of a Philly Beer Week, I needed to dial back, stay closer to home, and not be on a train or in a traffic jam on day 6. From Station Taproom to The Drafting Room to Ron's Original to Flying Pig to TJ's to Teresa's Next Door, quality beer bars are plentiful within a 10 mile radius of my house. Not to mention the breweries like McKenzie Brew House, Sly Fox, Victory, and Iron Hill. The 'burbs, listen up city folk, at least to the west are not such a bad place to be, food- and beer-wise, at least.

~ Contrary to some beliefs, bars not participating in Philly Beer Week are not suffering. It's been interesting to pick up on this sentiment both from pariticipants and non-participants in this year's PBW.

~ Case in point, I began last evening with a quick stop in to one of the western suburbs finest, Station Taproom (directly across from the Downingtown train station). Sean McGettigan, owner, and Chef Tim Smith have been doing what they do so well for over two years. And at this non-PBW session, $3 happy hour pints were being poured from locals like Victory (Ranch), Tröegs (Perpetual), Sly Fox (O'Reilly's), and Philadelphia Brewing (Walt Wit) along side solid out-of-towners like Half Acre (Daisy Cutter), Fullers (cask of London Porter), Stone (Imperial Russian), Hacker Pschorr (Weisse), Alesmith (Nautical Nut), Stillwater (Premium), and Sierra Nevada (Porter).

~ But this all still plays into my becoming-even-more-entrenched-belief that there's not much reason for bars and restaurants outside of Philly to get too greatly involved in PBW, particularly when it requires essentually paying for advertising and perceived access.

~ Sorry to venture off there for a bit into the political end of matters. Won't happen again, I promise...at least until next week.

~ On to The Drafting Room, where a solid crowd gathered early and lasted past 9 p.m. to drink free homebrew (the only legal way to do it at a bar) from friends of Artisan Homebrew and the local B.U.Z.Z. homebrew club based in West Chester, Pa.

~ I should probably get the apology out of the way upfront here to the brewers not pictured below. I approached things, I guess you could say, sort of bass-ackwards and gathered up the three remaining brewers at 10 p.m. and snapped a picture of them behind their tap handles. Earlier with the whole group might have a made plenty of more sense, you think? Nonetheless, the picture below of the three below show that they were still holding up pretty well getting late on into the evening.

~ Since the beers were free, The Drafting Room pulled in local dog rescue organization All 4 Paws (full disclosure — wait, really, do I need to do "full disclosure" for this? — our puppy came to us courtesy of All 4 Paws) and asked all customers who were drinking for free to donate generously to this worthy cause. A few dogs that are currently being fostered, including the very cute and personable Billy-Bob pictured below, showed up to lap up some of the action in hopes of finding their "forever home".

~ No reports yet on the total donations for the evening. From the homebrewing side, eight cornelius kegs were drained, none sucked, all were tasty in their own way, and, for this palate, none were more pleasing than Mike Hamara's (no sucking up here, I promise) Crepuscule with a touch of fruitiness and Brettanomyces and Alric Von Gerbig's Saison Du Bubba which was pleasingly spicy, herbally, and one of the most all-around flavorful beers of the night for me. The IPAs were pretty decent, but yet it wasn't exactly what I was looking for in a beer style on this particular night. Even the Blind Pig from Russian River was not tripping my taste buds the way it normally would. That's the beauty of this thing we call taste, right? It can vary from day to day, based on some things we understand and many others that we likely do not.

~ I had hopes of completing a suburban run with a stop at another non-PBW-sanctioned beer event — that of good food, beer, and people at TJ's in Paoli. And, then the plans would have called for running into a Chimay event at Teresa's Next Door in Wayne and scouring for some leftovers from the previous night's debauchery with Dr. Joel and his New Holland beers. But, alas, sitting outside with Howard (TDR), Mike and Lisa, dogs, and beers on a beautiful evening (it wasn't raining for once!) was all too comfortable. So, the night ended in Exton and a good night it was. 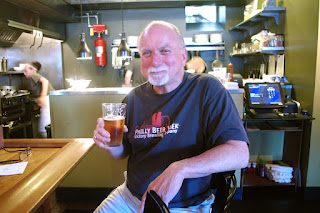 (Richard Ruch, man about Station Taproom, one of the region's finsest kitchen and bar setups) 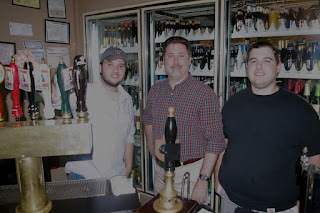 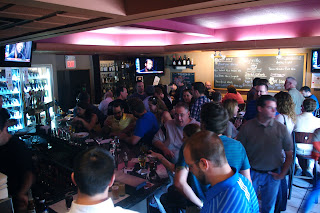 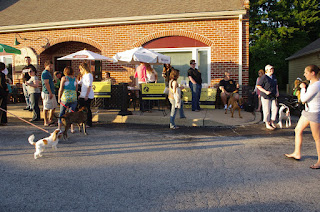 (A beautiful night of weather and homebrewed beer brought the people and the dogs outside.) 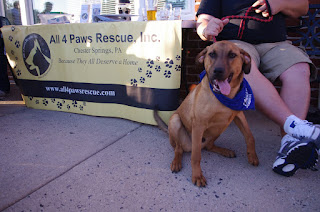 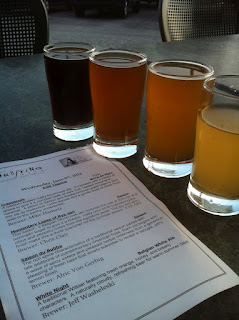 (The first four homebrewed beers on tap at 6 p.m.) 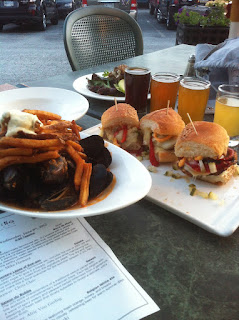 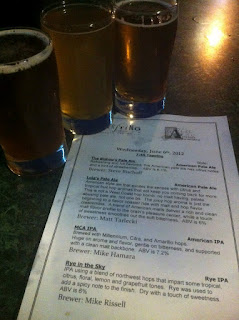