Lew stole some of my thunder this morning. Well, not intentionally of course, but it's fun to blame someone else for what results from my tardiness in getting this to you. Jack and I were speaking yesterday at the Sly Fox Bock Festival & Goat Races about how the family aspect of the day has really become one of the defining features of the festival. Almost enough so to overshadow the goat races and the beer. 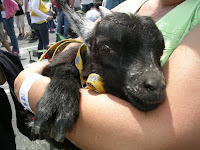 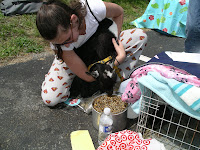 When looking across the festival yesterday and taking in the event, I couldn't help but take notice of the kids in attendance. Twice as many as last year? Could be. There was beer drinking, German folk dancing, goats prancing and racing (do goats prance?)...but, amongst it all were infants strapped on parent's fronts and backs, children playing on the ground, and everyone behaving as if this was all quite natural. 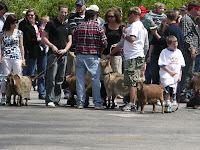 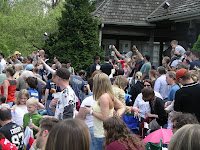 Unfortunately, this is not quite natural here in this part of the world. Too often drinking (usually, beer drinking) is demonized to the point that an outsider would believe that those who attend a type of festival such as this must have a "problem" and only drink to get drunk. To the contrary, this is one superb example of a festival where parents can feel secure in bringing their children and not exposing them to the, as Lew put it, boobs that can tend to give beer events and drinkers unsavory reputations. Chugging beer? Didn't see it. Profanity? Rarely. Casual eating, drinking, and laughter? Plenty of it. 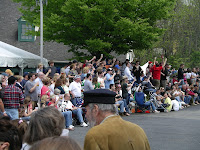 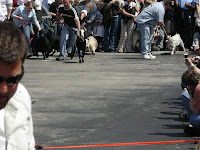 Capturing a part of the overflowing gemuchlicheit of the day, my favorite photo is of Ric Hoffman's (no, no...not Ric..he's only in the background) daughter Sage. She wins hearts where ever she travels with pop; we first met her at Ommegang where we camped next to the Stewart's crew. But, back to the picture. Unfortunately, the other kids and the dog (whose leash she is holding) are not in the picture. That could have made the perfect picture. But, the picture is a great (and cute) example of the atmosphere at this Sly Fox event. 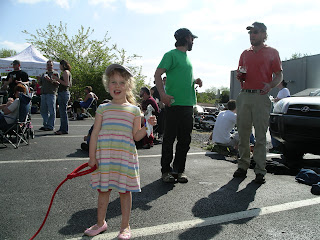 Oh, by the way, Jasper was the winning goat and, hence, the name of this year's Mai Bock at Sly Fox...which, oh and also by the way, is a smooth drinking example of good American-made Mai Bock. 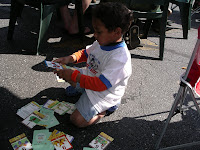 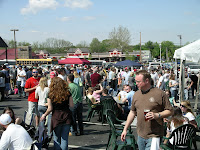 More by the wayishness, don't forget to check out the continuing frivolity taking place at Dan Bengel-less blog as he frivols his way around Belgian, um Belgium.
Written by Bryan Kolesar at Monday, May 05, 2008

I showed up late in the game for dinner with my family and some friends. A few pulled pork sandwiches and macaroni & cheeses later (with a couple of beers to boot) we were headed over to Milky Way Farms for some of their ice cream at the creamery. Mmmm....

The perfect family day ended with some homebrew at your place. Like you said that day, "This marks the unofficial beginning of summer."