Victory, yes I was there too

Is there anyone who hasn't made it to the "friends & family," "soft opening," or official opening? The way the threads read at BA, or over at Lew's site, Jack's site, and on and on, you wouldn't think otherwise.

Yesterday, May 7th, marked the official reemergence of Victory Brewing, the brew pub. But, nothing like you've seen before, at least not in Downingtown, PA. Congratulations to Ron, Bill, and entire Victory crew for opening, on time to say the least, a new version of Victory that is sure to impress and give my recent proclamation of northern Chester County's most comfortable new bar a run for its money. Well, really, there's fresh beer here, so.....

From a service aspect, Lew was right on the money to point out the efficiency of the kitchen and the bar. Service was prompt and attentive, the kitchen cranked out food faster than I've ever seen before, and the bar (filling station, not included) was keeping up with the thirsty patrons.

I'll have more to say after repeat visits, but for now make sure you head over for fresh tastes of Wild Devil (HopDevil with Brett), 10 Year Alt (revisited, and still a fave of mine), Sapphire, all of the other usual suspects plus some that will become more usual than they used to be. With taps-a-plenty and a growler filling station second-to-none, you'll have no excuses for not sampling the wide variety of styles that Victory is brewing. 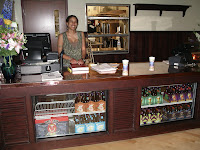 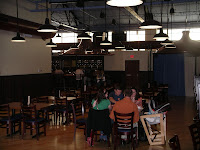 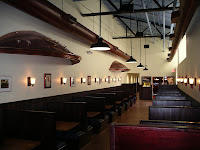 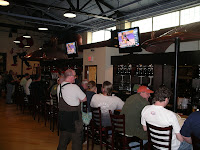 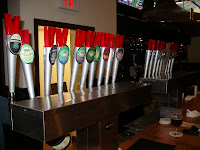 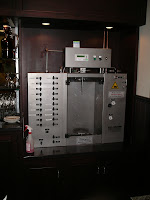 I've only been there twice, I'm having a hard time seeing where things are in relation to the old layout.

Front door is by the video machines right? But I can't see where the new bar is, in one picture it looks like it's in the back of the old dining room, in the other it looks like it's against the outside wall across mirrored from where it used to be...

Help! before I drive to Downingtown just to see!

That'd be great, let me know when and I'll meet you at Victory!

Just kidding. The new entrance is now roughly where the hostess stand was previously. At this new entrance, they have a larger hostess stand with coolers underneath to sell six-packs of beer from. Where the long bar used to be is now the booth seating. This booth area of the dining room is much more private and feels separate from the bar area. Very conducive for family dining, if you want to be away from the bar scene.

The brewery is now mostly walled off without glass to see in through. Retail and restrooms are in same location. The new bar is where the old restaurant and storage used to be. They opened up the storage area into the bar and more dining room area. The bar is impressive with decorative copper kettle tops over the bar. The counterflow growler filling station is behind the bar. Roughly twenty or so CO2 taps and a few cask engines.

Maybe instead of my words, their PDF version of the layout would be more helpful.

Oh wow, that is different, I was trying to imagine them cramming those pictures into the old space.