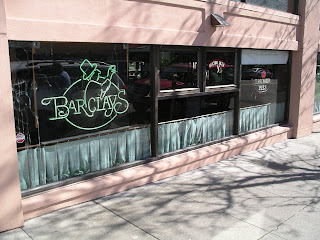 Oakland? Not what comes immediately to mind. Berkeley? Almost. Barclays is located just off CA-route 24 (<- cool picture, make the jump) and a couple of blocks from the Rockridge stop of BART's Pittsburg line. It's along College Avenue heading into Berkeley on the north side of CA-24, so it's a healthy couple of mile walk up into the heart of Berkeley (town and university). It has an Oakland mailing address, but more of a Berkeley vibe.

Now that the location for the National Homebrewers Conference in 2009 has been announced as "Bay Area" (Oakland), I figured it was high time I tell you my latest tale from California. That's motivation, plus the multitudes telling me they can't get enough of my aged stories originally written weeks and months ago.

This Barclays profile could be a week old or a year old; I'm thinking that it wouldn't matter. Even though I've now been there just once, I get a feeling that Barclays is as much the same as they ever have been, other than the constantly changing tap list and the daily specials. With the high quality tap list that they keep, the beers actually change quite often. Fortunately, they keep their website updated daily with current tap lists and food specials.

I make these statements with the greatest affection. Barclays feels like the kind of place that just continues to do what they do and do it well. Heading into their second generation (opened in October 1991 in the former space of Cactus Taqueria, who moved just down the avenue), this is no easy feat. Locals and college students who went to Barclay's in the early 90s are able to pass along stories, or at least maybe with discretion, to their children who are now coming of legal drinking age. 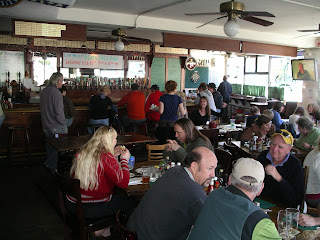 Approaching from the sidewalk, the pub is set down a few steps making it a semi-subterranean joint. Entering from a shielded patio area off the bustle of the sidewalk makes for a comfortable approach to the pub.

Looking at the tables and the decor on the walls, the pub has the feeling of memories laid upon memories. Beer memorabilia scatters across the walls. Taps, both CO2 and cask, line the wall behind the long bar. A dartboard hanging in the corner always had a gathering of throwers during a visit.

Old timers, youngins, prepsters, and beatniks of all ages take up seats at the bar and tables. I get the feeling from sitting in the pub that the stories and memories from across the years can be found in every corner and this creates a warm pub feel. (Keep in mind that I was there for lunch, so I have absolutely no idea what the scene looks like late at night.)

The food is a solid lineup of dependable suspects like chicken sandwiches and burgers, soups and salads, crabcakes, calamari, and shrimp cocktail, and a few solid entrees for the hungrier of the group. 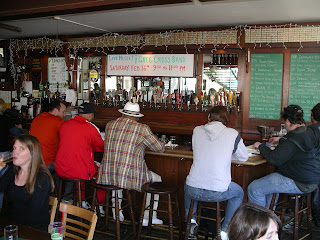 For the thirsty crowd (hydration is important in the summer months!), local beverage dominate. Barclays has almost all corners of the Bay Area covered. When we were there in February, among the 30 or so taps we could easily find representation from Speakeasy, Anchor, Hoptown (now closed), Sierra Nevada, Bear Republic, Russian River, Tied House, Moonlight, Iron Springs, Lost Coast, Drake's, Anderson Valley, Trumer, and El Toro. As of this current week's tap list, most of these are still represented along with other local favorites from E.J. Phair, Lagunitas, and Marin.

For food, I kept all things French, with an Onion soup and Dip sandwich. My suds trip, on the other hand, took me from Anchor's Liberty (wish we saw this more often on the East Coast), to Bombay by Boat (never had anything disappointing from Brian Hunt at Moonlight), stepping up to Speakeasy's Big Daddy, and finishing off with Drake's 1500. Was I on the West Coast? Hell, yes!

If I was there this week, the Blind Pig would have no problem finding its way to my table over and over again. This was my first visit, but it certainly won't be my last visit. It would be interesting to hear from others more experienced with Barclays how close to the mark I am with my descriptions.

After Barclays, we headed further on up the road to the hills of Berkeley passing the USMC recruitment office protests along the way (CNN story link). We headed across town to Trumer, where we picked up some nice pilsener glasses to bring home with us. Saved for our next visit to Berkeley/Oakland are recommended beer joints Jupiter, Cato's Ale House, Ben & Nick's, and Triple Rock. 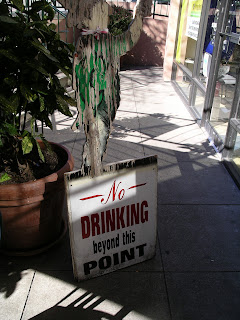 As for other lingering stories from the attic?! Fear not, there's still more from this February trip to California and also the June trip to Dallas. And, of course, Pittsburgh will be coming up in the queue too. Good thing there's thousands of great timeless beer stories to tell.
Written by Bryan Kolesar at Wednesday, July 09, 2008

We were in Oakland and Berkeley two weeks ago. Rats, I wish I had known about Barclay's; we ended up at Raleigh's on Telegraph (I had a Bear Republic Racer IPA). Did get to Toronado's, however, which was great. Love the Lounge, by the way.

Thanks for the tips. Just what I need, more options in the Bay Area , ha!

You could try something from Linden Street Brewing (Oakland) at "The Trappist", an ale house specializing in Belgian brew, though not above pouring a local product. Oh, it's in Oakland, too, on 8th Street, but sorry, without the Berkeley vibe.

Thank you so much for putting this up. I work there, and it's great to hear that we're liked. thank you!