(Index to The Week of Ommegang)
Interesting bunch of pictures from Chris yesterday where they wound up in Hancock, NY. Sounds like the light is at the end of the tunnel with just two days to go and some fresh clothes on their backs. Today, they're off to Andes, NY. Couple more 50 mile days and they'll be sittin' pretty in the Fields of Ommegang.

Take it away Chris. 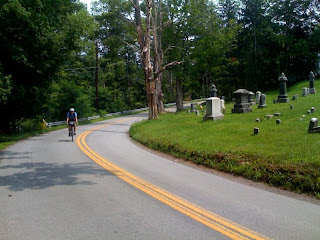 Probably the most uneventful day of the trip both cycling wise and beer wise. Today we crossed into New York after a modest 55 miles. As always the route was beautiful and almost completely traffic-free. Don said it was one of the best bike routes he'd ever been on.

Jeff, our guide, is basically using us as Guinea pigs for a touring company he'd like to start. When he gets it off the ground I'd highly recommend using him if touring is your thing.

Today route involved less flat tires and less hills (still not for the faint of heart though). Also, no bears on today ride although I did have a deer cut me off! 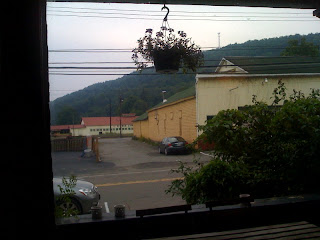 As for the beer, last night was hard to top. I keep thinking about the beer list last night and it was way better than anything I'd ever seen in a hotel before. Tonight we did manage to find Spaten Oktoberfest and Harpoon IPA in Hancock, but it took some searching. 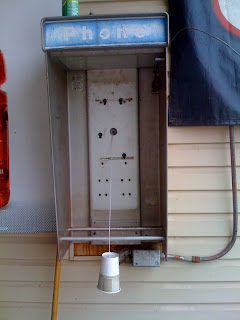 The town's a bit eerie and there's not much going on (ed. note: if anyone didn't receive a call home, the picture above may explain why...and a little something more about the town). Apparently it's an old stone quarrying town. I've included a couple of pictures, one from the inside of the restaurant we ate in, and one of a storefront window on the main street. Aside from that, there's a gun raffle you can get tickets for and apparently Elvis is coming to the playhouse in August. 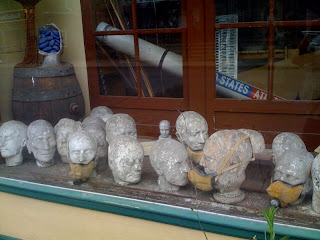 A. The Beer Lass has arrived and that means fresh riding clothes and cargo-free riding for the remainder of the trip.

B. Jeff tells us that our lodgings for tomorrow night will have the best beer selection of the trip! 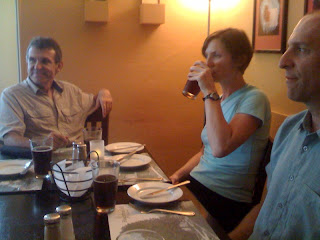