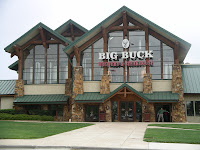 Everything is bigger in Texas. And, there are more hunters per capita than any other state. Okay, I can't really substantiate either of those comments, but it allows me to set the stage here for my latest visit to the Big Buck Brewery & Steakhouse in Grapevine, Texas. Oh, and I also believe that a Texas restaurant must tag the ubiquitous "& Steakhouse" on to its name in order to be considered a legit player on the Texas dining scene. Of course, I jest, so on to the review... 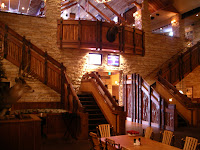 I visited the Big Buck Brewery & Steakhouse, just minutes north of the Dallas-Fort Worth airport, during each of my last two trips to the Dallas region. I found the beers and the service at their comfortable Grapevine location to be consistently decent each time. I sampled their lunch menu during my first visit and their dinner menu during the second. The food quality also held up well during both visits.

It's not too difficult to find the brewery, considering it sits just off of the interstate and is part of a large complex that includes a Bass Pro Shop (a very, very large one at that) and a hotel. Hm, come to think of it, I wonder if Adam Avery and crew stopped here before heading off on their fishing trip? 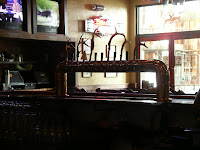 Big Buck had been a part of a mini-chain based in Michigan. Roughly a year ago, they sold this, the only, Texas location to the Bass Pro Shop company. They continue to be permitted to brand with the Big Buck name, though that will expire at some undetermined point in the future. Head Brewer Raymond Plasek assured me that what has been decided at this point is regardless of name change, he will be permitted by the owners to continue the brewpub concept with free reign over the styles and brewing. 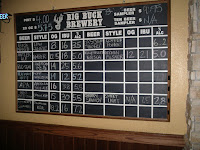 That's a good thing considering what I sampled. While the Buck Naked Light (described as one of the most popular), Gringo Modelo (yes, it's their take on the Negra Modelo), and Pale Ale (struck me with a bit of unpleasant diacetyl) were not particular spectacular for my palate, others fared much better in showcasing the brewmaster's talents. Some of these lighter bodied and less flavorful brews, Raymond described, are necessary to satiate the tastes and thirsts of those looking for simple refreshment from the heat of the Texas sun. 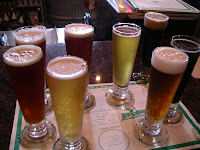 What I was struck by was the Hefeweizen, Chocolate Stout, Red Stag, and Scotch Ale. The hefeweizen was particular fresh and lively tasting (the citrus flavors were obvious and did not need any assistance from an offered lemon slice) and seemed just perfect for me on that particular 98F evening. The chocolate stout then capped off dinner as a perfect dessert, all by itself. In between was a phenomenal bone-in ribeye, that paired with mashed potatoes and assorted vegetables and green, created the perfect Texas steak dinner. The red ale and scotch ale provided nice solid samples of their respective styles and paired nicely with the large pulled pork sandwich and fries. Other interesting looking items on the menu include venison, buffalo, and (of course) pork and beef many ways. A Texas meat house indeed! 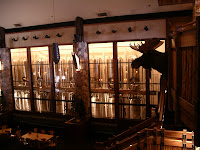 As for the ambiance, I'll point back to my earlier comments of "big", "guns", and "comfortable". Once you've taken in the enormity of the Bass Pro Shops (where you'll find anything, I repeat anything!, that you possibly could need to survive in the out-of-doors), the restaurant/brewery is similarly large and impressive. With mounted animals, mostly deer, watching over from every conceivable location, the cavernous space inside and its soaring ceilings are only matched, in my experience, by Church Brew Works in Pittsburgh, PA. The restaurant space is downstairs, with serving tanks (if I recall correctly, 18 of them) behind glass lining the one interior wall. Symmetrical staircases lead up from the ground floor to the brewhouse and bar which are perched on the second floor and look down to the restaurant space. Aside from my recent comments about the chairs at Ron's Original, these have got to be some of the most comfortable barstools ever to grace my seat. From the bar there are numerous TVs to keep track of sporting action, while the far side of the room is lined with glass and reveals Raymond in action in the brewhouse. 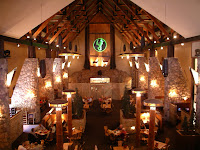 There are always roughly 8-10 beers on tap and the bar staff both times impressed me with their ability and willingness to talk craft beer. As I mentioned, Raymond was at the bar during my first visit and gave me a run down on the brewery's, and his, history of brewing. Also, he mentioned the homebrew collaborations that they've undertook with the local community in recent years. 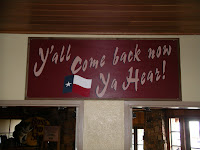 When you're in the northwestern suburbs of Dallas on the way to Fort Worth or waiting out a flight at DFW, there's not much in the way of craft beer to speak of either at restaurants or retail shops. Big Buck certainly fills this need well, and would be disappointing if the status quo changed (other than the name...though, the name does have some appeal to it). Between a good meal and a few carefully selected beers, it's difficult to go wrong.