(Index to The Week of Ommegang)
Monday's travel had our friends heading out from Upper Black Eddy, PA to Delaware Water Gap, PA...close to 50 miles.

Looks like The Brew Lounge doesn't know what it got itself into. Mrs. Sixpack has stepped in to ask just what exactly is going on out there on the Road to Cooperstown. Seems the crew has it covered in pictures...little bit of cycling, little bit of Americana, and a little speed bump or two that Don has phoned home about. Yeah, and a few beers for sustenance.

Chris is back again to tell his side of Day 2's story.
So we started this morning to the "road closed" sign. Actually we'd learned about it the night before, but it did take some adjustments and add a couple miles. 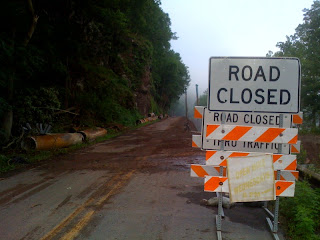 Beverly, the owner of Indian Rock sent us off at 9:30 after a breakfast of fruit and locally baked pastries that only a touring cyclist can justify eating.

Then we were off to Easton. About ten miles into the ride our fearless leader Jeff confessed that we were about to hit the first "real" hills of the trip. One of them being one of the steepest I've ever done in my life.

The road up to Weyerbacher had me wondering what Dan Weirback had against cyclists. Apparently there's no way to get there without doing some pretty serious hills. 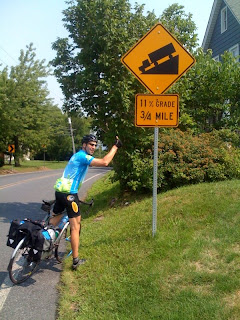 Once we got there though we realized cyclists were very welcome. Brewers Chris and Jeff met us on our arrival and informed us that they were in the middle of a brew, but welcomed us to help ourselves to samples at the bar. More importantly they directed us toward the cold liquor tanks where we dumped out our chlorinated hotel tap water and filled up with the clean, filtered water they make their beer with. Much better. 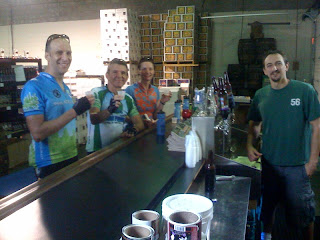 Then to the bar to try some new releases. We started with a bottle of yet unlabeled Bravo, the second of their "Brewer's Choice" series. (it follows Alpha, get it?). It was a very smooth and well balanced Red Ale. Just the right thing for a mid-ride stop as opposed to the blow-your-doors-off 10% alcohol stuff Weyerbacher is often known for. We also had a splash of their Slam Dunkel dunkelweisse. Good stuff, complex on both the yeast and malt fronts. 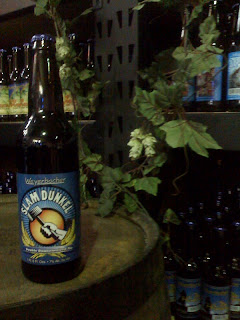 Of course we had to get back on the bikes so we couldn't sample all of the beers we wanted to. But our host Barbara told us to take whatever bottles we could fit on our bikes. Some how the crew elected me to carry the beers. They determined that I had the least cargo. So my packing prowess and Spartan travelling philosophy had earned me an extra 3 pounds of cargo. Jeff got assigned some cargo too, but that's because he's a monster. He used to own a courier service for Pete's sake. He probably didn't even notice it was there. 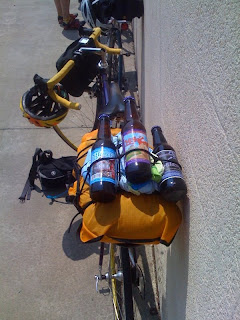 From there we crossed over into New Jersey and spent the next couple of hours winding our way along the Delaware River along scenic roads and past beautiful houses that make a former Jersey boy like me wonder where our state ever got it's rep.

Around 4:00 we pulled up to our lodgings at the Deer Head Inn in Delaware Water Gap, Pa. This place is a great Jazz venue that attracts a lot of well known musicians. Unfortunately for us there was no jazz tonight and music is their chosen art, not beer. Good thing we had the Weyerbacher. We put it on ice immediately then hit the showers.

By 5 we were relaxing on the Inn's wrap around porch enjoying a Weyerbacher Blanche to the sound of bells from the church tower next door. That was followed by the Muse (very refreshing after a day in the saddle), then dinner across the street. Great Italian food, but again a mediocre beer selection. Fortunately we'd saved a couple dessert beers.

The second round on the porch involved a Weyerbacher Heresy (a rich and warming Bourbon-aged Imperial stout) and 13, the latest of their big, high alcohol, numbered beers. Also this round on the porch was set to the sound of tree frogs instead of church bells. 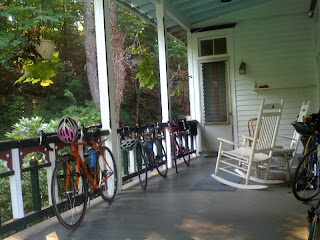 Fortunately the beer ran out before we could get ourselves into trouble. Tomorrow after all us our biggest day, both in miles and vertical feet. Jeff however promises that this will be made up for by the fact that tomorrow's lodgings will be some of the best on the trip. Wish us luck! 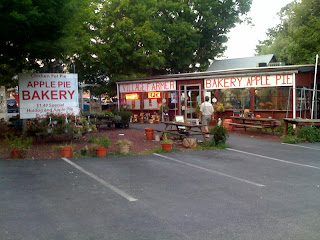 (By the way, this last picture has nothing to do with beer or bikes but we did have ice cream there. I just like the fact that they specialize in hot dogs and apple pie! What else do you need?) 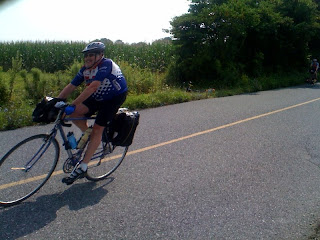 Thanks for bringing this story to us Bryan. I don't know how these guys do it!