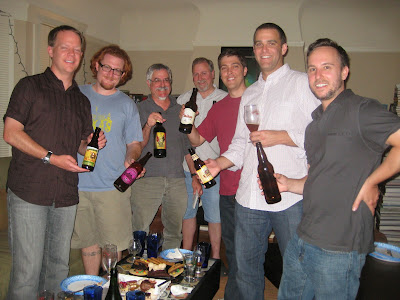 Lovers of better beer are often known by many adjectives: friendly; welcoming; respectful; camaraderie (oops, that's a noun, is it not?); passionate; caring; supportive. I see this week in and week out around my home region of the Mid-Atlantic/Northeast (coast).

I discovered this on the other side of the country in a roomful of similarly-minded beer lovers in San Francisco last week. Almost exactly 168 hours ago (that'd be 1 week in case your math is a little rusty...last Monday).

I was in touch with Brian Yaeger (you know, right? the guy who wrote Red, White, and Brew...documenting his beer travels around this country) prior to heading to San Francisco to ask if he'd be interested in some sort of a meetup while I was in town. I'd bring some beer along with me of the Pennsylvania flavor and we'd see what we could do about scaring up some local enthusiasts. Some were just getting over the buzz of the National Homebrewers Conference (NHC) which had wrapped up just a couple of days prior. Others were preparing for future events and unable to attend.

What we did have, in addition to Brian and myself, were 6 guys interested in seeing some Pennsylvania rarities...at least rare by California standards. To be fair, Brian's squeeze, Kimberly, was there as well.

I'd only met Brian once before in person, during San Francisco's Beer Week in February '09 at the 21st Amendment's Monk's Blood Dinner, courtesy of the 21A crew and "home brew chef" Sean Paxton. Brian, Kimberly, and I were sat at the head table, along with Sean Paxton's wife and daughter, Jesse Friedman (beerandnosh.com, food and photog phenom...seriously, you must check out his handiwork...here's a link again in case you've missed the first one) and Elianna, Chaz Lakcip, and Bill Brand.

After meeting Brian, I knew he'd be able to pull of this sort of Monday Night Meetup.

With my day's worth of work complete in the Financial District, and after a brief stop-off at Murphy's Pub with my co-worker (aka TBL Lancaster County Correspondent), I cleaned myself up back in my hotel room, grabbed the box of goodies, and hailed a cab. It was a quick trip across town toward the Golden Gate Park and Brian's and Kimberly's house. 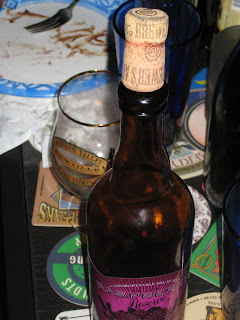 (And what to our wondering eyes but a Brewers Art cork in the Sly Fox bottle...it all makes sense, given their bottling relationship)
Not long after I arrived, we were joined by Steve Sharpiro, provider of the incredibly useful Beer by Bart service.

Also in for the tasting was Jay Hinman, the traveling beer connoisseur who gets around the country quite smartly and documents it all at Hedonist Beer Jive.

Jay Brooks pulled a fast one on me and showed up after I figured the trials of the past week at his website, Brookston Beer Bulletin, would keep him out of service for yet another day. Alas, Jay was there and ready to relive the days of his Pennsylvania past (have you seen his profession of cheesesteak love? read on for the tie-in).

Chris Cohen rounded out the group. A friend of Brian's and Kimberly's, Chris is every bit as much a beer enthusiast/geek as the rest of us. Plus, two days later he calls out to me at City Beer Store. and we sat right on down to enjoy a Black Orchard from The Bruery and times are just swell. Small world it is...even when I'm 3000 miles from home. 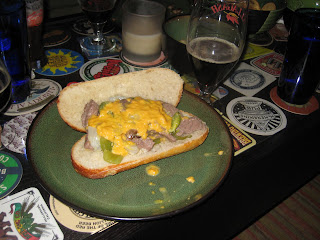 (Cheesesteaks and Beer, in San Francisco)
Welcoming. That's one word I used earlier to describe these guys. Case in point---Not only did they turn out on a Monday just after NHC and the weekend wraps up, but they treated me like a visiting head of state by cooking up a Philadelphia, uh, "delicacy", the Cheesesteak...complete with a beer-infused cheese whiz, onions, and peppers. Though Kimberly credited Brian with coming up with the idea, in fact it was she that implemented it...and stuck the landing. Very flattering, guys and gal, thank you.

Passionate. There's another one of them there adjectives. We didn't necessarily geek our way through the night. That's what I like about our Monday Night Tastings back at home here at Sly Fox---(okay, easy now before any of you call me out on not being there in, like, many months)---they're easy. We smell the beer, we taste it, we talk about it...but in a very comfortable, just slightly geeky but not especially snobby manner.

And, even though this wasn't a beer and food pairing type of event, Brian was right on the mark when he wrote that the Black Raspberry Reserve from Sly Fox went oh-so-beautifully with the dessert platter from a local bakery...chocolate, raspberries, and a fruit-forward raspberry beer...wow! 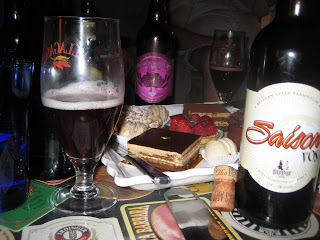 (Sly Fox's Black Raspberry Reserve with chocolate and fruit, a must)
Also along for the airplane ride was: Victory Baltic Thunder; Victory WildDevil; Sly Fox Saison Vos; Stoudts Heifer in Wheat; Weyerbacher Double Simcoe; and a bottle of my homebrewed Saison, which has now been in the bottle a little over a year after spending a few months in the secondary fermenter. It's really, in my own opinion, taking on a different life every few months or so and is really enjoyable now.

A Tröegs Flying Mouflan Barleywine and Iron Hill Honey Do Wit also made the trip but wound up as gifts I left with others that I met along the way in San Francisco.

The other two beers which I really wanted to bring along but never got around to packing up for the trip were the Flying Fish Exit 4 ("American Trippel") and Philadelphia Brewing's Fleur de Lehigh (a "spicy pale ale-like" beer). Those (and other) omissions notwithstanding, Pennsylvania was well-represented and the impression made on this group of guys was a very favorable one. 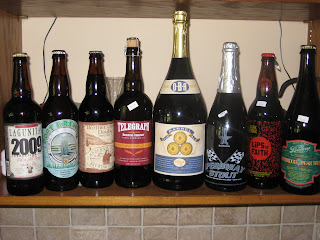 (There's a story behind these beers, you'll need to wait a few days to hear it. For now, feast thy eyes and start thirsting)