Heading out to San Francisco again had me thinking about unfinished postings from the past. This one in particular reminds me of my last trip to San Francisco during their Beer Week in February and the dinner that I and others shared with Bill Brand at 21st Amendment on that fateful Sunday.

Months prior, Bill had asked a question that I began to answer...first in a comment to his post...then in a posting that I intended to post at The Brew Lounge. Neither saw the light of day, but I'm gonna try to fix that here today before I head out to the Bay Area.

The context of Bill's question was: "Why do most Americans drink bland lager?"

Most of what is written below was originally written over a year ago and I haven't (or wouldn't) change much of anything of it. I've added a few extra words and sentences to round it out here or there, but basically it's the same as what I began last year.

To begin with, I recently saw (I apologize that I don't recall at whose site it was referenced) the following quote from artist, Robert Henri.

"We are not here to do what has already been done." ...and from, yet, somewhere else..."Men go down the path less-traveled and never traveled."

Take a meander through it...I'd be interested to hear your thoughts on the subject as well. I've always believed that, as with many things in life, we acquire habits and tendencies from those who raised us. This can apply to anything from tastes in culinary delights to political leanings and religious beliefs. As we grow into adulthood, some are able to easily forge their own identities by exploring and adopting tastes that fit their unique individual.

Though, I believe that many...so many...do not. Whether it's a function of laziness (path of least resistance or change) or simply hearing the same message over and over and over again through the years, when it comes time to pick a political party, a religion, or a beer at the bar it often is what was passed down to us from those who raised us. The sad (my opinion) is that many never change. Some see it as a badge of pride that they never change throughout life. Okay, I'll try to limit my commentary here to just beer and in my circle of family and friends ;-)

Most have come to accept, often quite warily, that what I drink is some sort of beer. But, when it comes time to pick up a case of beer or order one at the bar, they go for the old reliable (aka something that looks, smells, and tastes like a Budweiser).

Sadly, when challenged as to whether they truly enjoy what they are drinking, the grunting reply that I most often receive is something along the lines of "this is a real beer," "I'm getting a normal beer," or "I don't like dark/fruity/bitter/warm/etc. beer."

When I press further and ask if they really enjoy the TASTE of their beer, roughly half of the time I get an answer that doesn't go far enough to articulate whether or why they like what they drink. The answers usually translate to something that simply suggests: "This is beer...not a sissy/foofoo beer." As if no thought really goes into it. They just seem programmed to drink it.

That's where the power of upbringing comes into play. But, also the power of marketing. So, hats off to the parents, grandparents, and marketing companies who have brainwashed tens of millions into believing the bland, tasteless, and uninteresting mass-produced lightish lager is what we should be enjoying when it comes to a glass of beer. That it is what beer really is...what it should be.

How do, as like-minded individuals, go about changing this? More on this in a future posting.

Obviously, my two cents for what they're worth. Great topic, Bill. It's one that I attempt to explore with friends and family whenever possible and one for which we may never have a real solid answer. 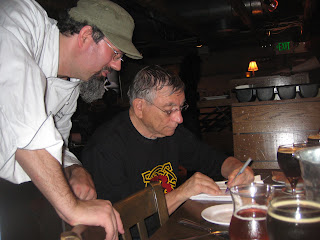 "Most have come to accept, often quite warily, that what I drink is some sort of beer. But, when it comes time to pick up a case of beer or order one at the bar, they go for the old reliable (aka something that looks, smells, and tastes like a Budweiser)."

I think that is an interesting statement and could apply it to my life in the opposite way as I'm like that with food. I'm a meat and potato guy, and very rarely take chances with food. While I'm always willing to try any beer once, I very rarely change up what I eat. I accept that people who eat fois gras (or however you spell it) are eating food, but at the end of the day I'm getting something more like a hamburger. And when challenged, I also really don't have an answer why.