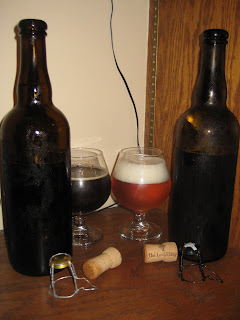 There are some good things to be said for style and staying within guidelines. And, there's yet other good things to be said for drinking anti-stylistically. That's what I did, in a manner of speaking, a few days back. There are always a few bottles lurking around the beer cooler that are missing labels. There were two in particular that I've been very curious about. One had a Lost Abbey cap under a wire cage while the other one was completely brandless and labelless. This suggested it could have been homebrewed. So, even though these beers may have, in fact, been brewed with particular styles in mind, my mind and my palate had in no way pre-judged these beers (well, except that I knew one of them came from Lost Abbey). And there is what I would call the big difference. When judging (actual judging, as in a competition), it's very important that beers be brewed to particular style guidelines so that they may be judged against each other based on a common baseline understanding of the style (I realize this is a live grenade; please withhold comments on this point!). But, when sitting down to enjoy a beer at home...where, of course, there's "judging" taking place, I all too often begin to make up my mind about, first, which beer to choose out of the cooler to, second, how it tastes compared to how I expected it to taste. That happened most recently a few weeks back when I tried a new beer, FoxTrot, from Weyerbacher. On their website it mentioned (fairly certain without checking my notes) something about it being a dark bière de garde. While it did use a saison yeast, it was much roastier than I would have expected a biere de garde to offer. Not that it was necessarily a bad thing. Just different from what I had been expecting. Which left me scratching my head with a "well, did I really like it?...well, yeah...but..." kind of reaction. If they hadn't stuck a style name on it, I most likely would have been just fine with it and moved on. Let's see now, what exactly was it that I cleared out of my refrigerator last week? The Lost Abbey...I'm betting it was their Avant Garde (speaking of Bière de Gardes). It was a bit smoother than a saison would be and was definitely of the French/Belgian influence, as opposed to American...giving off those estery yeast flavors. The other bottle? I'm guessing that it was homebrew...a very good one at that. I'm thinking it was something along the lines of a Belgian Quadrupel. If that sounds like something you made and put into a large bottle, then thank you and congratulations on making a very good beer. A very potent beer, but a very tasty one. Would I have been able to pass these same judgements if I had a label telling me that they were supposed to be, oh I dunno, a Belgian IPA and a Milk Stout, respectively? Maybe, maybe not. No matter, with this approach, I was able to put aside biases and focus strictly on what I tasted, derived, and interpreted from each beer. I highly suggest blind tasting every once in a while for anyone looking to hone their tasting skills. Blind in the way that you should have no way of even beginning to narrow down what you are about to taste. Blind in a way that you don't have someone choosing something from your refrigerator...where you already have an beginning idea of what's in inventory. Blind in a way that you're not asking someone to get you any one of the beers off the tap list of 10 or 20 or 30 beers...that you've already perused. Totally blind to style and expectations. Try it sometime and let me know how it goes.
Written by Bryan Kolesar at Tuesday, June 02, 2009

I totally agree with your points about style. It frustrates me when a beer is out-of-style. I recently tried Lagunitas Undercover Shutdown. It was called an "imperial mild." Naturally, this isn't a real style, but I thought it would be subtle and, you know, undercover. It was big, hoppy and malty, the way a good barleywine is. I wish they would've just called it that.

I recently wrote this about styles on my blog:
Style is important, taste is more important. And most styles in the American craft beer scene are arbitrary. I love beers that are true to their style. That's not because I think that loyalty to a style is critical, but most beers that stray from a certain style suffer as a result. So, I think keeping true to a style is great (especially if it is a historical, centuries-old style). But if straying from a style still produces a good (or better) beer; I'm totally in favor of it. But I believe this is rarely the case.

It is nice when the style mentioned on the label is descriptive of the beer in the bottle. You don't want to open a can of tuna and discover that you got corned-beef hash. But we also have to remember that the styles are arbitrary and that new styles are being created all the time-most often by somebody messing around with a previously existing style.
And for that, we should be grateful.

I remember bringing home all of the leftover samples from a homebrew competition Dock St. hosted about 12 years ago. One very late night a bunch of us wound up at my apartment opening up many unlabeled bottles of homebrew. Very interesting and very fun.