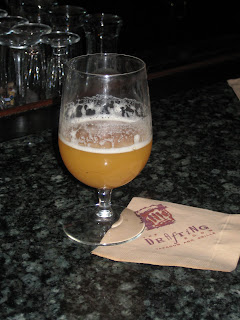 Wow, many thanks to all of you who showed up on short notice to The Drafting Room last night on such short notice. I was running a bit late around 10pm when I finally showed up and, boy, was I surprised to see the parking lot so full of cars. Inside it was standing room only of, oh I don't know---is 50 an exaggeration? And the red-headed slut shot that I was handed? Much appreciated, of course. Though, I was surprised a bit by all of the Coors Light, Budweiser, and assorted mixed drinks. Then it hit me. Somewhere between the Juvenile, Britney Spears, and Guns 'n' Roses soundtrack and the talk of days gone by...I realized you weren't there for me, it was the Downingtown High School reunion of nineteen-ninety-and-something-or-another. No worries. More hoppy 15th Anniversary Ale for me. And a 13th Anniversary ("imperial lager") that has held up fairly well. And a nice time spent chatting with Howard and Alex, Heather, and Greg. I can say with almost 100% certainty that I've never closed The Drafting Room. Even though I wasn't the last to leave, the bar was closed and the final hookups were being arranged on the patio before they were being chased off. But, not before Howard and I shared the last official glass of 14th Anniversary Ale, which also has held its own over the past year. I know many other aggressively hopped beers that go off to that great big hopfield in the sky long before this beer. In between all of this, I had a Watermelon Wheat from 21st Amendment for the 4th time in the last week. I enjoy this beer so much that I'll be dedicating a posting all alone to this summertime quencher. Brace yourself. There's a lot of catch-up to do around here over the next week or two. Cheers!
Written by Bryan Kolesar at Sunday, June 28, 2009

Email ThisBlogThis!Share to TwitterShare to FacebookShare to Pinterest
Categories: The Drafting Room

Are you kidding - watermelon beer? Remember in college - we soaked inside of a watermelon with vodka - but beer?

Marck, think bitter rind, not sweet watermelon...open your mind and wallet and buy a can... That's right, I said can :)