Have I ruined a perfectly good homebrewed stout?

The answer to the title is still unknown. The jury will be out for at least a week, I suppose. Gotta let the cherries do their thing with the yeast (or actually, vice versa, right?) In the meantime, thought you might like to see a few pictures. Or, at least one particular person is interested in the cherries and these pictures. After the beer spent 6.5 days in the primary fermenter, it seemed time to move it to the secondary glass carboy fermenter where I could watch the fermenting cherry action. The original gravity was spot on 1.100 and after almost a week in a 70-74 degree room, two packets of dry yeast brought the gravity down to right around 1.030. The fermentation had begun in less than 12 hours and last for around 40-42 hours. This attenuation, Adam tells me, was a pretty good one and resulted in a hearty stout weighing in at around 9.5% ABV. 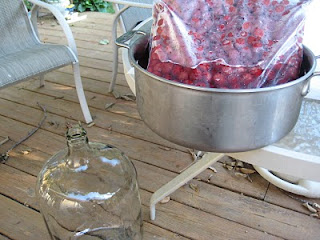 Then, I had to open up those darned frozen cherries. They were fresh last August from a Berks County farm, but I knew I wouldn't use them quickly enough, so into the freezer they went. Now they've made their debut. Let's see now. What have I learned? I've learned, first off, that these fresh cherries will not only have pits (duh, I knew that), but there will also be small twigs, leaves, and stems as well. When I decided not to pit the cherries before tossing them into the carboy, I knew that I would have to somehow break the skin of the cherries so that the beer could better and more quickly get to work on the sugars contained therein. This turned into a project of taking small handfuls of cherries from the freezer bags, picking out stems and whatnot, and squashing them in my hands to break their skins before tossing them through the funnel--all ten pounds of them 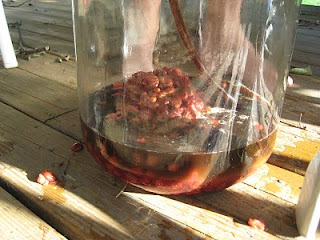 I also learned that it would have been much kinder on my hands to have allowed the cherries to come closer to room temperature before handling them instead of moving them from the freezer to the refrigerator overnight to immediately using them first thing in the morning. Then, it was on to the transferring of the beer from the bucket to the carboy on top of the cherries. Actually, the third thing that I learned was that a full five gallons of beer and ten pounds of cherries will fit into a six gallon carboy with no problem. 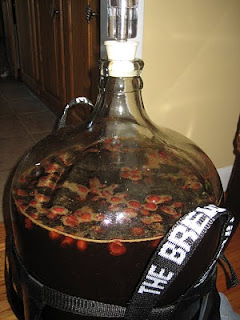 Within minutes, there were little bubbles forming around some of the cherries that had already floated to the top. By the time I put the airlock on more apparent fermentation had begun and in less than two hours, the airlock began slowly "burping". By the time 24 hours had passed, the airlock was burping every five seconds, or so, and everything appeared okay.....for now.... 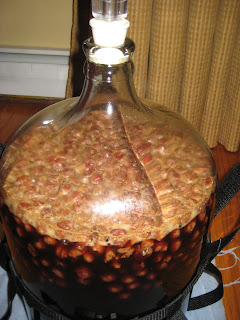 Now it's just a matter of time to see what the introduction of these cherries will do to what was seeming like a perfectly good chocolate imperial stout. p.s. Laziness got the better of me and I decided not to re-shoot nor try to edit the video that you see here. Sorry, just turn your head if you really care to watch this most boring video. Hint--not even the cats find it interesting to sit and watch the fermenting action!
Written by Bryan Kolesar at Monday, August 30, 2010

Email ThisBlogThis!Share to TwitterShare to FacebookShare to Pinterest
Categories: Homebrewing

Yes, I do care. I even wrote something coincidentally...

I even gave you a new title.

This type of hand-crushed, adventerous brewing brings a tear to my eye... Beautiful! How long do you suppose you'll leave the beer on the cherries?

Jean, I'm thinking a max of two weeks. But, I'm gonna let time, visual survey, scientific measurement, and a dash of intuition be the ultimate judge.

Though, from my "vast" amount of brewing experience, I'd be better served to let the intuition thing to others.

(oh, and btw, is the tear because you feel for me and all of the hard labor....)

Adam, we should let the "victor" be decided by an impartial, blind-tasting jury. After all, you can't win just because you used fresh elderberries. Doesn't the beer have to be good, too?! heheh :-p

Too subjective...I never trust those things, besides, respect your "elders"...(wince)

6-8 weeks is usually how long I leave the fruit in there.

Actually, extra crushing of the cherries was not really necessary. Freezing the fruit actually ruptures the cell walls and lets the fruit turn into mush and incorporate into the beer more readily. After being frozen for a year, I'm sure those cell walls were obliterated.


Sounds good, will await to hear the results!

Now that is some info I can use :-) Thanks Ben!

Thanks for the feedback both here and in private e-mail to me. I'd received some very helpful information, some along the same theme as Ben's point about freezing, and I figured I'd pass it along here too, in abbreviated form along with some of my thoughts....

- the cherries would have probably split open themselves from the freezing and thawing process. The cell walls will burst in this process.
TBL: (I knew I should have paid attention in high school science!)

- allowing them to thaw, covered but not airtight, in the bucket with a campden tablet or two will give the sulphite (campden tab) a chance to kill any wild yeast on the fruit. 24 hours will allow the sulphite to do its job and dissipate.
TBL: I actually have a few tablets that I was given at Artisan Homebrew, but chose not to use them; others commented that after a year in the freezer, not much unwanted wild yeast might have survived

- Doing the fruit addition in a wide mouthed bucket for secondary would have been easier, both in breaking apart the solid blocks of cherries and in their removal.
TBL: As I was tossing the cherries in, I was actually thinking about how difficult it will be to remove the cherries through the carboy neck; where's my assistant!!

- They will float to the surface, and begin to look 'white' as the color and flavor is leached out of them by the fermentation process.
TBL: Began happening after almost 3 days

- When this has pretty well been accomplished, then rack it over to a tertiary glass fermenter to finish, leaving the fruit and trub behind.
TBL: After what I saw left behind at the bottom the primary and now gathering at the bottom of the secondary, I'd already been considering this

- You'll also know at this point if your yeast could use a boost in the form of energizer or additional yeast (like champagne).
TBL: So far, fermentation has been good, but time will tell and I'll take another reading when this secondary ferment appears to stop

Update please! BTW I have the elderberries.

interestingly enough, Mr. NCF, you could taste it right this minute if you can tear yourself away from your epoxy! (took a sample....at 1.020-1.022 and tasting like it wants to go into a serving vessel!)

Would have liked a taste, but, didn't see this until it was late. Are the cherries present in flavor?

grainy, chocolately aroma....same in flavor, but presently overwhelmed a bit by the sour cherry. Thinking that this should age well. So far, so good, methinks.