A New Homebrew....what could be next?! 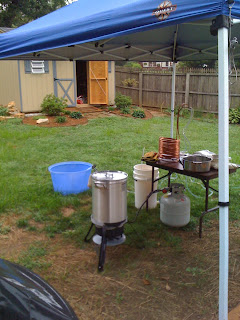 (The brewhouse setup, looking all nice and clean while awaiting boiling temperature)
I heard the cries to "just brew something". I felt the beer pressure from The NonconFermist. I'd put the finishing clamps on the homemade wort chiller that Patty made for me....2 years ago!! I bought the ingredients from Mike Hamara at Artisan Homebrew in Downingtown, PA all the way back in early May. I was out excuses and had no where to hide; it was time to brew. The way I shape the story makes it sound like I don't like to homebrew the way some people don't like to prepare and cook dinner for themselves. Reality couldn't be farther from that. I love to cook and I love to homebrew. Problem is, as life accumulates more things and more things to do, it seems that I have less time than ever to cook dinner, let alone make a batch of homebrewed beer. 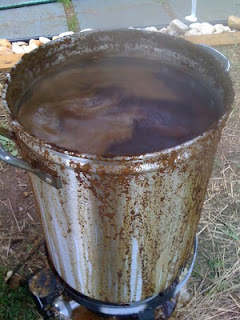 (After the boilover, everything looking not so nice and clean)
It was obvious this past weekend that I was a bit rusty. My timing and sequencing of steps was off. My sanitation and attention to detail, fortunately, was pretty good. Maybe the recipe was too much for a "re-entry beer". Who knows. Still, even after brewing in the rain and cleaning up in the dark, the following morning it appeared that the yeast had begun their busy digestion of sugars overnight and a fermentation was underway. With 11 pounds of malt extract, 3 pounds of specialty stepping grains, 8 ounces of 100% cacao baking chocolate, and two packets of healthy yeast, there wasn't much excuse for fermentation to not begin quickly. In between, let's see, what else happened? I used a new turkey fryer that we got a steal of a deal on after last Thanksgiving at Lowes. Apparently turkey fryers don't sell so well after Thanksgiving. For $70, we got a nice 30-quart 45,000-BTU turkey fryer. Also, new to the process was a sweet new wort chiller that Patty made for me as a wedding anniversary present. Which anniversary, you should ask? Wait for it.......how about our 10th anniversary? Yup. And, yes, your math might be correct if you said we were coming up now on our 12th. Yup, I'm the jerk...but no-less-grateful jerk. 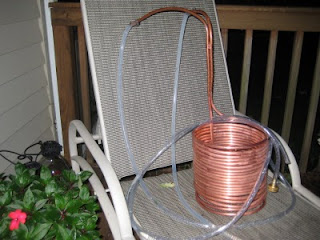 (The wort chiller after a hard 25 minutes of work)
She made the wort chiller with approximately 50 feet of copper tubing and made the input/output pieces high enough clear even the deepest homebrew kettles. Once hooked up to the garden hose, we were able to chill this batch from boiling temperature to under 100 degrees Fahrenheit in 10 minutes. Getting it down another 20-30 degrees proved a little more difficult given the extra warm summer we've been experiencing. After a total of 25 minutes, we gave up and dumped the wort into the primary fermenting bucket at 75 degrees Fahrenheit and pitched the yeast. There was, obviously, plenty of sugar for the healthy yeast to go to work on. In less than 12 hours and a temperature hovering around 70 degrees, the fermentation took off and lasted for almost two full days, with close to 30 of these hours showing a vigorous fermentation. Okay, so that was gratifying, given all that seemed to have gone wrong leading up to this point. Now, it's time to let things settle down and out before taking a reading in the next day or so to determine if we need more yeast to a little more work before racking the beer over into a glass carboy for a secondary fermentation while sitting on ten pounds of fresh sour cherries (well, fresh last year...frozen since then). Check back and I'll let you know what's happening.
(The morning after, the yeast looks to have found enough sugars to digest)
Written by Bryan Kolesar at Friday, August 20, 2010

Ah boil-overs are no fun! Glad you persevered. Do you plan on moving it to a secondary later? Some people swear that keeping it in the primary until bottling is the way to go.

Let us know how it progresses.

Oh yes, Jake. It's going on to ten pounds of sour cherries. Just to make things more interesting! And, good bad or otherwise, I'll be sure to keep you up-to-speed with how it progresses....all the way to consumption!

Well now things are looking up. Had a taste of it the other day and it is very promising indeed.

The cherries...oh the cherries...can't wait to hear about the cherries. Never brewed with fruit before. Hoping to get either elderberries or choke cherries if it isn't too late in the season.