I know--I've heard you. You want to know all about Ommegang's 7th Annual Belgium Comes to Cooperstown event. I've seen your emails, I've seen the website visits coming from Google searches on things like "BCTC 2010 pictures", "BCTC 2010", "Ommegang BCTC", "BCTC recap", "bands playing at belgian comes to cooperstown 2010" etc. I'll get to it, I promise. 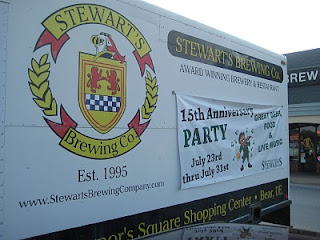 (No excuses for passers-by in the parking lot not to know)
But, first I have some material from last week that I thing you will enjoy as well. And it comes with color pictures for your added enjoyment! (If you'd like a fun look back into The Brew Lounge Archives, check out an interview I did with Ric Hoffman two years ago.) 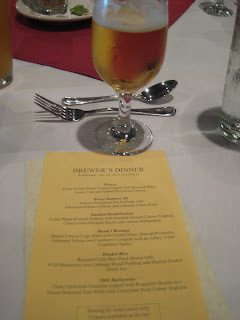 (An impressive-looking Dinner Menu awaited the 60 eager customers)
Stewart's Brewing Company in Bear, DE last week celebrated its 15th anniversary with a dinner for 60 appreciating customers. It was a dinner that I didn't commit to until just 6 hours prior, but one that I am so glad we made the decision to attend. 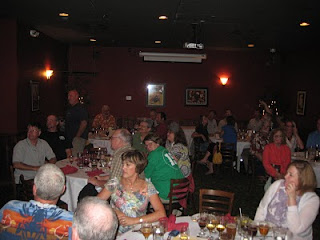 (A gathering of 60 watching the "team" be introduced after the dessert course)
Many of you have heard of Stewart's before. Some of you personally know Ric Hoffman, the head brewer. You may have seen him around Philly or the occasional beer festival. Thing is, when learning of his decision to not attend this year's Belgium Comes to Cooperstown event at Ommegang, I decided to give this dinner a little extra priority. 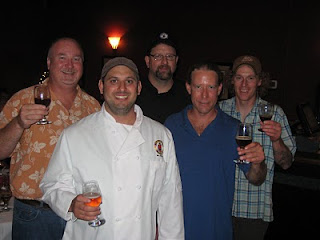 (Happy 15th Anniversary smiles and toasts from the Stewarts Brewing Company Crew, from left to right: Al Stewart-owner; Wyatt Cresswell-sous chef; Dan Dogan-executive chef; Ric Hoffman-head brewer; Eric Boice-assistant brewer)
Seeing Ric and all of his brewing friends at BCTC each year is always a treat and they all bring a little something special for campsite drinking festivities. Even if you don't know Ric personally, you may still know that his beers run the gamut of beer styles and have won multiple awards at the national level, including most recently Gold for Wind Blown Blonde at both the World Beer Cup and Great American Beer Festival in '08. His big year, award-wise, was in '07 when he brought home three bronze medals for the Dunkel Rico, Smoked Porter, and Stumblin' Monk (the first two at GABF and the latter at WBC). 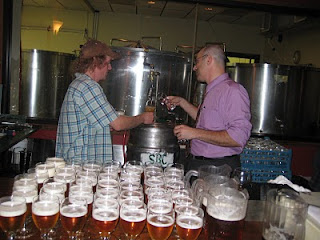 (Fillin' 'em up for the thirsty customers)
In addition to all of the wonderful beers I knew I'd be drinking during the evening, the special food side of the dinner looked equally impressive. This is due in large part to the introduction of a chef, Dan Dogan, recently off a stint at the Pine Hill Golf Club in New Jersey. With Dan recently being brought on board, Stewart's is looking to expand the dining menu just a bit by infusing some new and interesting menu selections...while at the same time not alienating long-time customers who have grown to appreciate the menu over the years. 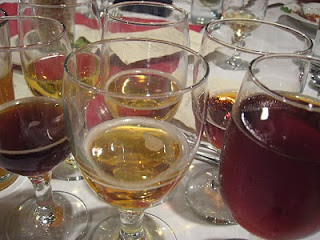 (A lineup of the dinner's six beers, enough to satisfy almost any palate)
On this particular night, we marveled at how calmly the kitchen apparently was handling 60 people dining off the anniversary menu, while a bar and restaurant full of "normal" paying customers were conducting business as usual on the other side of the wall. The dinner went smoothly under Chef Dogan's command. 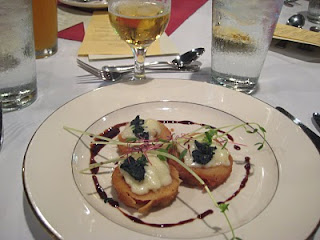 (Fried Golden Roma Tomato topped with Broccoli Rabe, Lump Crab and Melted Provolone Cheese)
Shortly after 6:30pm, we were started off with introductions and thank-yous from Shawn Snyder (longest-tenured employee) and Ric Hoffman who took us into the first course of Czech Pilsner and Fried Roma Tomatoes...dressed with Broccoli Rabe, Lump Crab Meat, and Melted Provolone. The beer went very nicely with the fried crunch of the tomato and the pleasant bitterness of the Rabe. The beer impressed so much, that it became my growler of choice to take to BCTC this past weekend. Sure, I could've stuck with the B-theme in BCTC and taken something like the Monk's Revenge, but I figured a nice and solid Pilsner would do the trick in breaking up the Sours, the Trappists, the big ABVs, etc that typically dominate the annual festival at Ommegang. 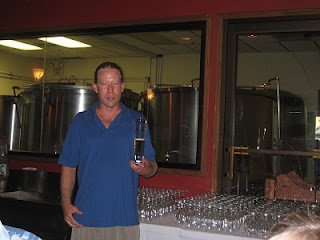 (Ric Hoffman, head brewer, introducing his German Pilsner)
And do the trick, it did. Passing the growler around "Brewer's Alley"© (gonna follow in Jack Curtin's steps here and copyright that for future use) and talking about Ric's absence, the conversation went from "damn, wish Ric was here...Nat and Sage, too" to "damn, that's a really good beer!" More on BCTC to come, that was just a taste...now back to Stewart's. 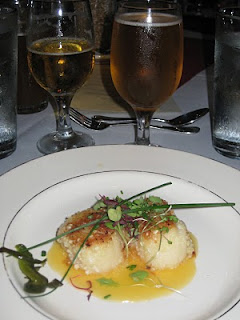 (Arborio-Encrusted Sea Scallops with Julienned Poblano Chilies and a Honey Citrus Glaze)
The second course included a light summer ale brewed with honey from a West Grove Bee Farm, lemongrass, ginger, and curaçao orange peel. This very refreshing beer was served with perfectly-done sea scallops with an arborio rice crispy crunch that no one around the table could stop raving about. 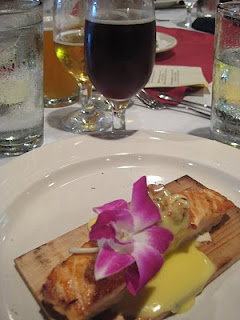 (Cedar Plank-Roasted Salmon with Smoked Salmon Casino Topping, Cherrywood-Smoked Bacon and Lemon Hollandaise)
Then next course had a beer with a pleasant touch of smoke that complimented the salmon and its cherrywood-smoked bacon accompaniment ever so nicely. 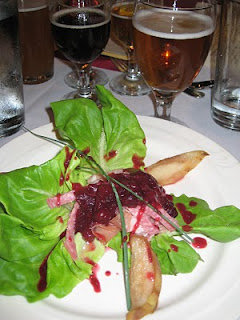 (Butter Lettuce Cups filled with Grilled Pears, Shaved Prosciutto, Julienned Salami and Cranberry Compote with an Abbey Tripel Cranberry Spritz)
Prosciutto and Salami on a dish together? With cranberries and pears? And served with the Monk's Revenge Tripel? How good did this sound? I'll tell you how good. It tasted just as great as it sounded off the paper. Though, the presentation of the meat in a somewhat tightly mounded lump of meat I was a little surprised by, since I typically expect thinly-sliced prosciutto to be served either loosely draped around the plate, or distributed flat around the plate, or perhaps wrapped around a piece of fruit like a slice of pear or melon. No worries, though, using the fork and a finger I was able to pull the tasty meat apart and enjoy it as I would have liked it to be. 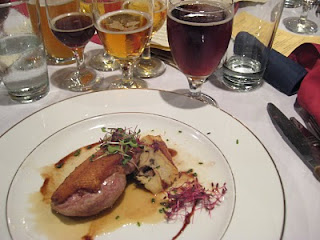 (Roasted Crisp-Skin Duck Breast with Wild Mushroom and Cabbage Bread Pudding and Munich Dunkel Duck Jus)
The next course was an incredible piece of tender duck breast with a crispy piece of skin lining the edge. At this point, we were beginning to fill up (as each course was a generous offering plate of food) and it was a good thing that the last 3 courses of the dinner had a bit of extra time between each of them. The award-winning, dark roasted Dunkel Rico did an admirable job of pairing well with the duck meat and the earthy wild mushrooms. 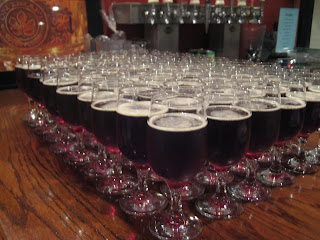 (Enough 2005 Vintage Barleywine, you think?)
And...drum roll please...now to the dessert course. It's funny how I eat very little dessert-y type of foods at home and rarely do when we go out to a "regular" dinner. But, a beer dinner? Well, when it's typically comprised of chocolate, fruit, and a strong beer like a barleywine, imperial stout, or even sometimes a strong IPA (yes...thinking carrot cake) it becomes extremely difficult for me to say no. As a matter-of-fact, it often becomes the most highly-anticipated part of my beer dinner. 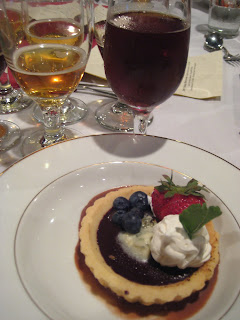 (Dark Chocolate Ganache topped with Roquefort Brulée in a Sweet Buttered Tart Shell with Chocolate Stout Crème Anglaise)
So what was it you ask? How about a 5-year-old vintage barleywine with a dark chocolate ganache and a dollop of Roquefort brulée on top and placed inside of a crust shell? I'm guessing I don't need to finish with any other descriptions. Yes, it was that good. (Al Stewart leading one last thank-you toast to all who have supported his restaurant and brewery over the years)
After dragging out our goodbyes by at least 30 more minutes or so, we knew it was finally time to make it back across the state line before it was too late. Our table full of new friends that we met made it difficult to leave. Hanging at the bar for that one last T.U.D. made it difficult to leave. Ric asking us to taste something extra because it would be rude to do otherwise made it difficult to leave. This was only my third visit (or fourth?) to Stewart's. My impression is that it's a casual kind of brewpub. It's a place where macro beer drinkers can drink alongside of craft beer drinkers and eventually see "the light". But, it's never struck me that anyone's doing any pretentious beer geek armtwisting or bullying to accomplish this. With a brewer like Ric, who's been there for 12 of the 15 years, maybe some of his Jerry Garcia-like cool rubs off on the customers. Maybe it's a Delaware thing. With a new chef in the kitchen adding some new flair to the menu, it's the kind of place that I wish more could call their local on their own home turf. For me, it's typically TJs. If I lived about 20-30 miles closer, it would likely be Stewart's. Happy Anniversary to the guys and ladies that have made Stewart's successful for 15 years. 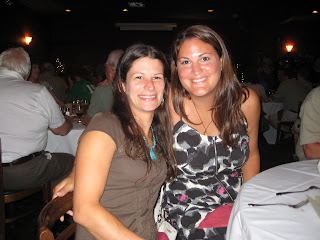 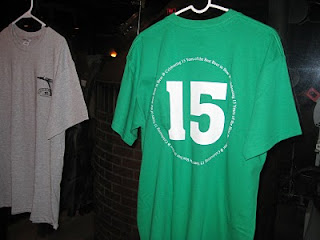