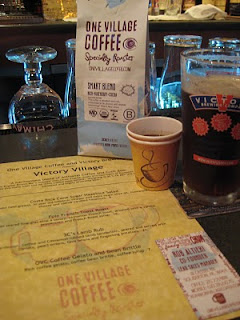 The best part of waking up.....is knowing that a Victory Brown Ale and One Village Coffee will be in your cup by the end of the night. Péché Mortel from Dieu Du Ciel outside of Montreal? Sure, it still holds a special place on my palate. But, how about a real drinkable coffee beer? There have been a couple I've sampled lately that have been anything but. Not this one. At 5.1% ABV, this one has sessionability written all over it. With just the right balance of coffee aroma, coffee flavor, and a real honest-to-goodness beer to back it up, upon one more review at Victory I think I'll be ready to put this solidly on my list of Top 10 new beers of 2010. Last night at Teresa's Next Door, I took the opposite approach and went to the debut of the beer at somewhere other than the brewery. I figured with the coffee roaster spending his night at TND, there might be a good story lurking there. 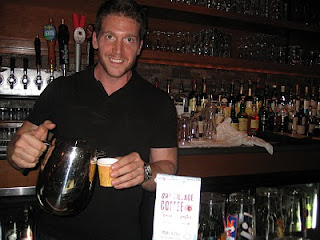 Rob Altieri, co-Founder and Lead Sales Manager of Souderton's three-year-old One Village Coffee, was on hand to personally hand-press some of his Smart Blend coffee and serve it next to the draft beer collaboratively brewed and blended at Victory Brewing Company. He started his night by quickly pulling the tap on the first Village beer poured at Victory in Downingtown and then afterward heading up TND where he spent the rest of his evening eating, drinking, and sharing the story of his coffee and this fine beer. As Andy and the TND crew is often wont to do, a special pairing menu was put together to help accentuate the beer, and vice versa. Unfortunately, we had other plans for dinner at home, so we opted only for a quick little bite of Tuna Tacos off the "regular" menu. 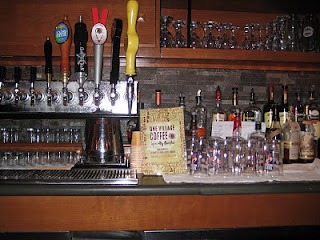 If I have my numbers correct, this was a 50-barrel batch. I'm not aware of how many kegs are staying with Victory and how many are making it out to market. However, at Victory's website, they do say that Whole Foods in Plymouth Meeting (a special pouring with Rob on Friday 8/27 from 8pm-11pm), Teresa's Next Door and Christopher's (Rob part-time bartends there) in Wayne, and Hawthorne's in Philly are a few of the select chosen accounts to be pouring this draft-only beer. In other words, between less than 100 kegs of this beer floating around and me filling up a few growlers at the Pub over the next month, if you want to taste some of this new beer from Victory you better do as "they" say and Act Now! Were you at one of the debuts last night? What was your opinion of the beer? Comment below!
Written by Bryan Kolesar at Tuesday, August 24, 2010

I had the privilege of tasting this beer on Monday night at Victory Brewing company. The aroma and flavor of the beer is like no other coffee beer I've tasted. It is so drinkable (I had 3) and doesn't weigh on you afterwards. The coffee flavor hits you up front and lingers at the back end while the brown ale is a great compliment and very tasty. Victory knows how to brew good beer and this pairing is unique and delicious. A must try beer before they run out!

I love that One Village logo.